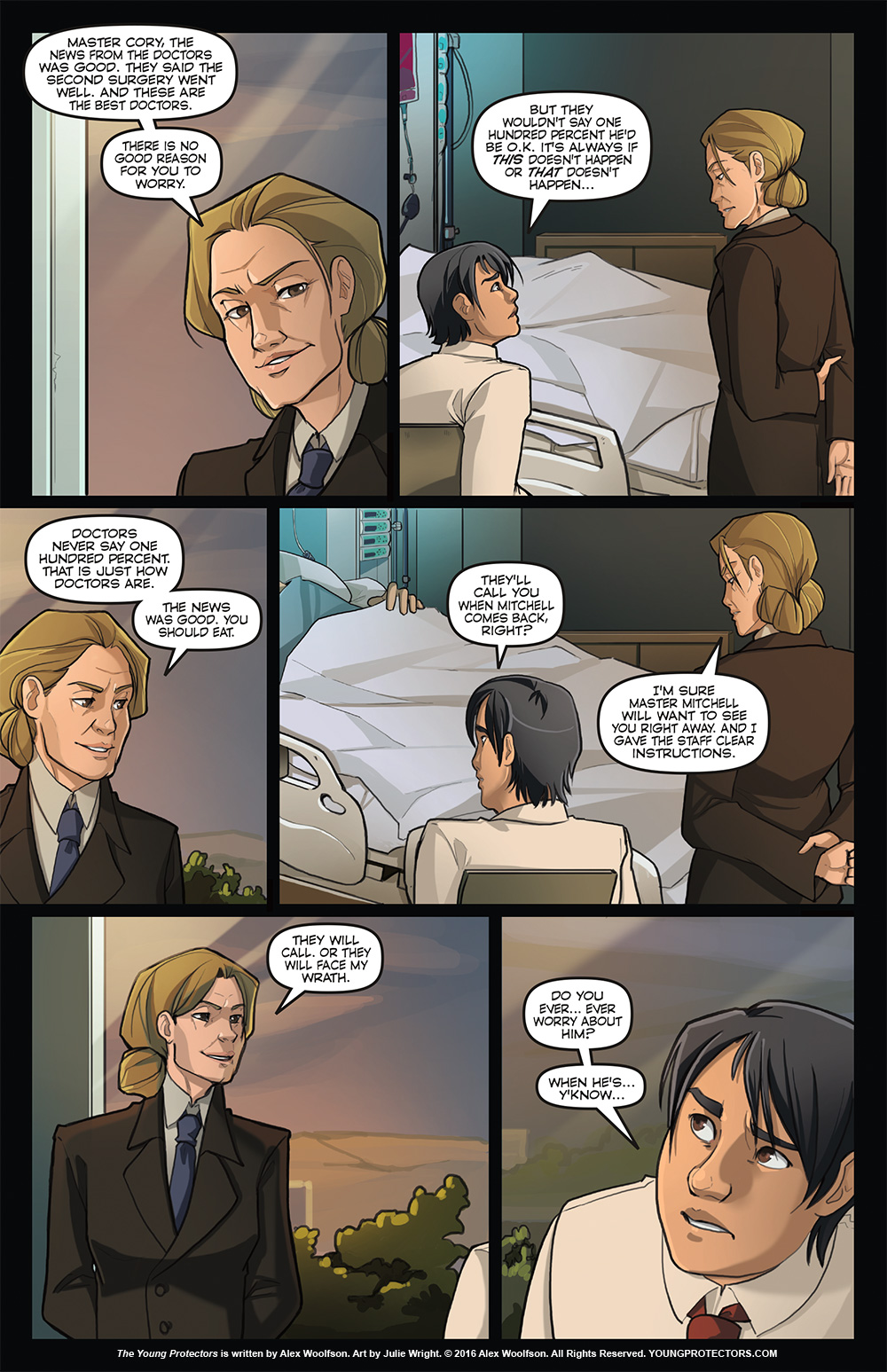 MASTER CORY, THE NEWS FROM THE DOCTORS WAS GOOD. THEY SAID THE SECOND SURGERY WENT WELL. AND THESE ARE THE BEST DOCTORS.

THERE IS NO GOOD REASON FOR YOU TO WORRY.

DOCTORS NEVER SAY ONE HUNDRED PERCENT. THAT IS JUST HOW DOCTORS ARE.

THE NEWS WAS GOOD. YOU SHOULD EAT.

THEY’LL CALL YOU WHEN MITCHELL COMES BACK, RIGHT?

I’M SURE MASTER MITCHELL WILL WANT TO SEE YOU RIGHT AWAY. AND I GAVE THE STAFF CLEAR INSTRUCTIONS.

THEY WILL CALL. OR THEY WILL FACE MY WRATH.

DO YOU EVER… EVER WORRY ABOUT HIM?

REGISTER TO VOTE NOW. If you’re a U.S. citizen, many deadlines to register are landing this week. It’s now or never for most of us. If you haven’t done so already, please click the black square Register to Vote banner I placed down on the lower right. That makes it really easy and once you’re registered, you’ll be all set for future elections.

I have been reading the comments, and I am sympathetic to those young folks who believe that their vote doesn’t matter or that the system is “broken,” so why bother? That was certainly something I might have said when I was in my early twenties. One of the best arguments in favor of voting is that (surprise!) the vote for president is actually just one vote out of many you’ll have the opportunity to make and that most of your votes will be made on local issues that 1) have a direct impact on your life and 2) are often very close so your vote will very much matter (think legalization of marijuana, local bans that impact trans folks, Proposition 8, etc.) If you haven’t voted before, you’ll be amazed at how much influence you can have on so many issues. These aren’t small potato things, and you will find at least one or two issues that you really care about on your ballot where you would want your voice heard.

But in terms of the national election, whenever I hear the arguments for why young people should abstain from voting, often made by young folks themselves (like me, back in the day), I’m often reminded of that movie quote from The Usual Suspects: “The greatest trick the Devil ever pulled was convincing the world he didn’t exist.” The truth is that it is young people who would be most willing and interested in changing the system. As a voting block, they are the biggest threat to those who don’t want anything to change. But if those in power directly told young people not to vote, they know that would make young people turn out in droves. So, they have to do a little magic trick: they need to convince young people that either a) their vote doesn’t matter or b) that all politicians are the same so it doesn’t matter how the vote turns out. And if they can do that, their work is done for them. Apathy and abstaining changes nothing. Outside of armed revolution (which I’m assuming many young folks aren’t down for), the only way to change the system is to make sure your voice is heard within the system. And the best way to do that is to get involved and to vote.

Living in a democracy has a bunch of privileges that many people in the world would literally kill to have. And for those privileges, there are only a few responsibilities asked of us as citizens, like jury duty and voting. Whether it makes a small difference or a big difference, it is in everyone’s interest that you take the time to get informed and then do your part to make sure our government truly represents the people it supposedly serves.

Seriously, vote. Just try it. Trust me, it’ll make you feel good. And you get a sticker which will make strangers smile at you. Which is awesome.

Adam DeKraker and I will be participating together in an interview on the Queer Sci-Fi Facebook page this Thursday, October 13th, at 2:00 P.M. P.S.T. You can find that page here.  We had a great time doing this last year. If you’re around, please stop by and bring some good questions!

Finally, I am looking forward to being a guest at the Yaoi North 2017 in Toronto, Canada. It takes place at the end of May in 2017. I rarely get to exhibit outside of the U.S., so if you’re in Canada, please take a moment to check it out. I hope to see you there! 🙂

So! We’ve gotten an update on Diego’s condition. Is Diego really going to be O.K.? Will Mrs. Roggenbauer be able to convince Cory to eat? And what does she think of what Mitch gets up to with The Young Protectors?