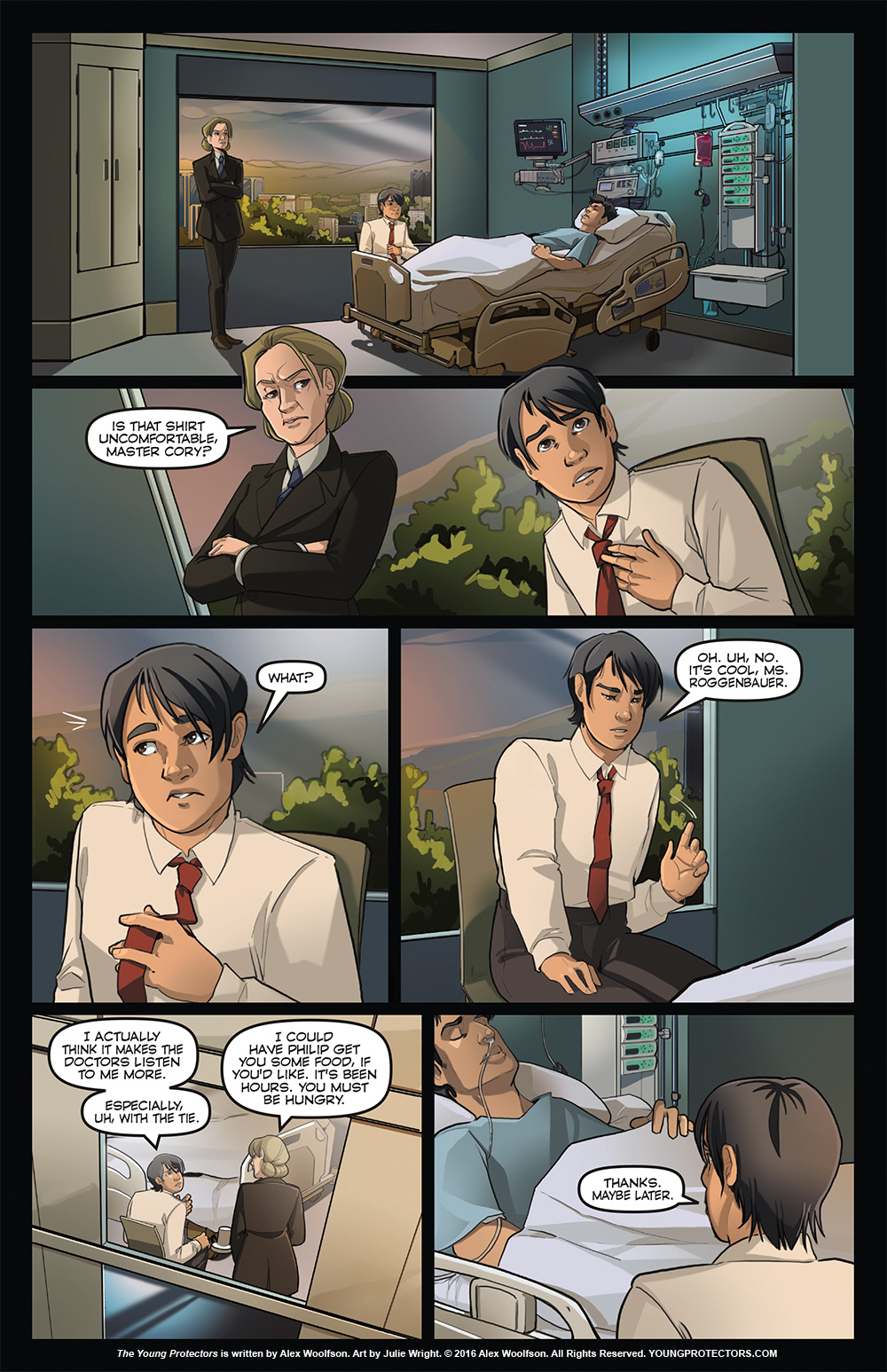 IS THAT SHIRT UNCOMFORTABLE, MASTER CORY?

I ACTUALLY THINK IT MAKES THE DOCTORS LISTEN TO ME MORE.

ESPECIALLY, UH, WITH THE TIE.

I COULD HAVE PHILIP GET YOU SOME FOOD, IF YOU’D LIKE. IT’S BEEN HOURS. YOU MUST BE HUNGRY.

Hi, Cory. How you feeling, buddy?

IMPORTANT ANNOUNCEMENT 1: If you haven’t registered to vote and you’re a U.S. citizen, now’s the time!  Click on that square Register to Vote banner down below on the right! This will be an historic election and your vote could literally make a huge difference in the fate of the entire world. It’s going to be close. Don’t sit this one out.

Supposedly half of all folks between the ages of 18-30 say they aren’t going to vote, even though they will likely be most impacted by what happens. But you’re better and smarter than that. You’re going to make a difference. Go click that Register to Vote banner right now and go vote on election day!

IMPORTANT ANNOUNCEMENT 2 (reprise edition): My artists have been working solidly on this comic, delivering twice weekly updates for the last 128 pages (the Flyboy Bonus Comic and Chapter 4). They have now requested a short break, and I think you’ll agree with me that it is well deserved. 🙂

Typically what would happen here is that a webcomic would go on “hiatus.” Maybe that would be a smart thing for me to do (I wouldn’t mind a break either). But I know that this webcomic serves as a special twice-weekly destination for a lot of you, it’s a chance to socialize and hang out with friends in the Comments, and I want to honor that. I wouldn’t be able to make these comics without your support, and you mean the world to me.

So, I wrote a short 6-page “bonus comic” and hired awesome artist Julie Wright (who worked on the Truth or Dare Bonus Comic) so I can keep posting pages on our usual twice-a-week schedule during this gap.

Now my previous bonus comics have very specifically not been “filler.” They were all meant to give character and plot information that’s important for the story. (And sometimes also give me a chance to change tone, e.g. to create some comic relief.) But from the beginning, it had always been my intention to jump from the end of Chapter 4 right into the first page of Chapter 5. I hadn’t intended to create a interlude at this point. So while this 6-page bonus comic does include some interesting character/world information, it’s about as close to filler as I’ll ever get. So with that in mind, if you absolutely can’t handle seeing non-main-story pages, I can tell you now when the main story will resume: Saturday, October 29th.

That said, I think Julie’s done an amazing job with the art. And with these 6 pages, we get to catch up with kick-ass telekinetic Cory, Flyboy’s long-lost friend from the Flyboy Bonus Comic! Enjoy!

So! Cory’s with his brother Diego in the hospital. But who’s this woman? Why is she so focused on Cory’s clothes? And why would Cory refuse food?