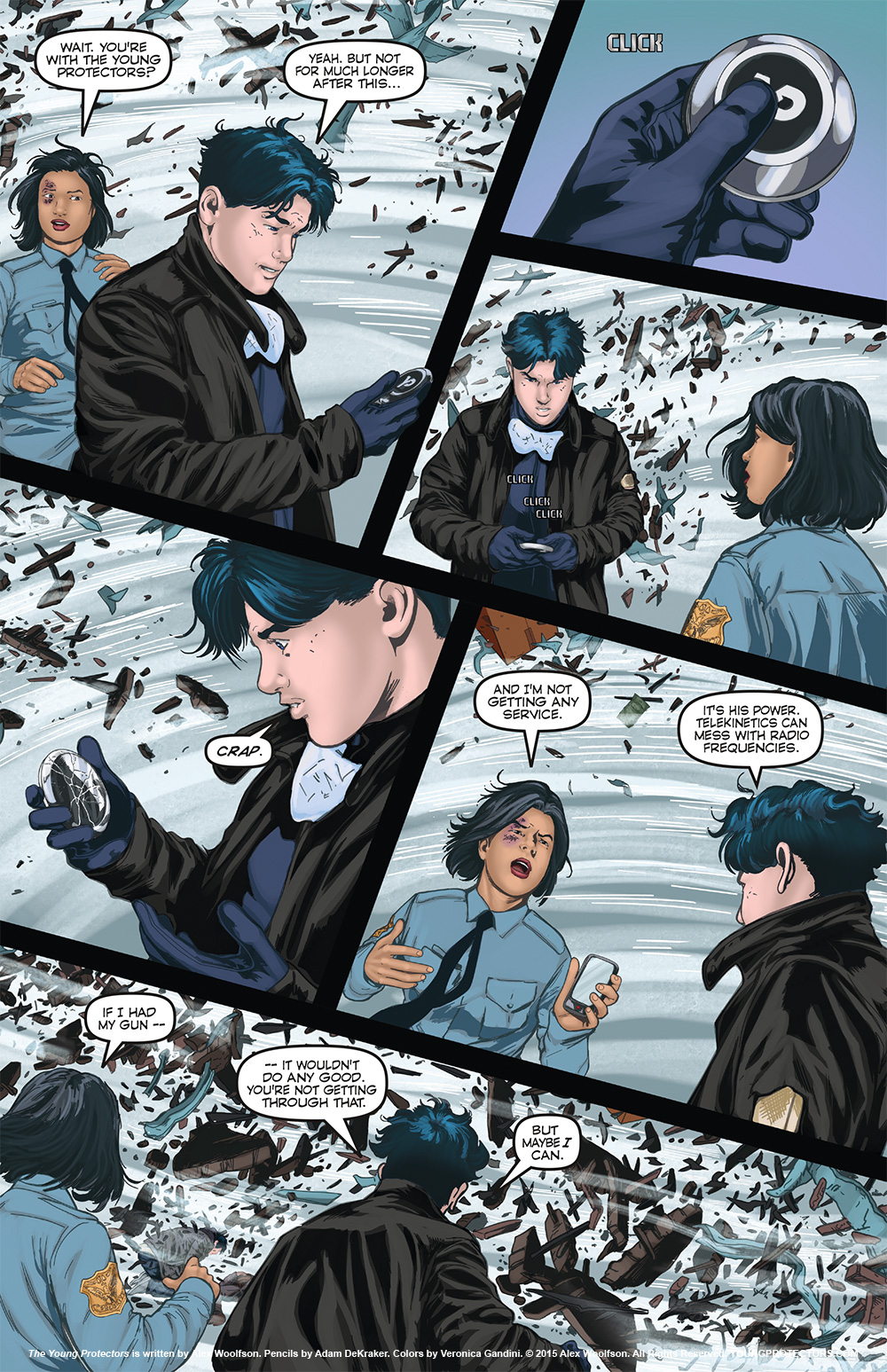 WAIT. YOU’RE WITH THE YOUNG PROTECTORS?

YEAH. BUT NOT FOR MUCH LONGER AFTER THIS…

AND I’M NOT GETTING ANY SERVICE.

IT’S HIS POWER. TELEKINETICS CAN MESS WITH RADIO FREQUENCIES.

— IT WOULDN’T DO ANY GOOD. YOU’RE NOT GETTING THROUGH THAT.

BUT MAYBE I CAN.

What are you thinking, Mitch?

So, I’ve talked about how the bonus comics fit into the Engaging the Enemy arc of The Young Protectors both in my notes under the page and also at length in the Comments section, but there still seems to be a fair amount of confusion about what exactly I’m doing. And I’ve actually gotten more than one question in the last couple weeks about when The Young Protectors is no longer going to be “on hiatus.” When you and your team have been working hard to continuously post two pages of comics a week, every week, without any interruption, and your readers think you are “on hiatus”, then what you have is clearly a failure to communicate. 🙂 And that failure must be mine.

The very fact that you are reading my note under the page means that you are already a TYP superfan, and an elite superfan at that. (You rock, BTW! Thank you!) And so I want to ask a favor. I’m going to edit the FAQ to include this information and also send out an email to my entire mailing list, but if it’s not too much trouble, if you could take a moment to let your friends know what I’m doing with the bonus comics and The Young Protectors in general, I’d appreciate it.

While I personally feel the Flyboy Bonus Comic is some of our best work, I can understand if there are readers who only want to read “present day events” or who don’t particularly care for this Flyboy story, for whatever reason. But there seem to be more than a few readers who are under the impression that The Young Protectors is no longer updating, or that I might never go back to our team in present day, and if you could help me dispel that misunderstanding, I’d really appreciate it. Basically, I explained everything in this comment: http://youngprotectors.com/typ/ete-flyboy-bonus-page-27/#comment-2315518333

Here the TL;DR “short” version: The present day events of Engaging the Enemy arc have been planned out from the beginning — those events will be told over 5 chapters. This arc will be published in three consecutive The Young Protectors trade paperback “volumes”. Each book will have two chapters from the present day story, and every book will then end with at least one “bonus comic”, which explores important information from the past. Volume One (already printed and soon-to-be available to the public early next year) ends with the Interlude and the Spooky/Commander Bonus Comic. The Flyboy Bonus Comic is what will end Volume Two. After the Flyboy Comic is complete, we will resume the present-day story on this Web site (with Chapter 4, which will start the final volume of The Engaging the Enemy arc, Volume 3.)

While these “bonus comics” do offer additional backstory on the characters, they also contain information that is important to the present-day plot. They are not intended as filler, and we consider them just as important to the overall story as what The Platinum Priestess and The Annihilator are up to in the present. This is why I have my main team working on them, and why we update the Flyboy Bonus Comic twice a week — they are as much a part of the Engaging the Enemy arc as anything else. The Flyboy Bonus Comic isn’t a hiatus, or a vacation for me or my artists: while these bonus comics were not part of the initial outline I wrote down over three years ago (and thus allow us to stretch our creative wings a bit), they are part of the overall story that I’m wanting to tell with these characters. Whether they are effective or compelling, I’ll leave to y’all to decide. But they aren’t side stories — they are an essential part of the main event that is the Engaging the Enemy arc of The Young Protectors.

The exception to this was, of course, the Truth or Dare comic. And this is where I think the confusion comes from. It was never my intention to post two back-to-back bonus comics — or to post the Truth or Dare Bonus Comic here on this site at all. While I still would hesitate to call that comic “filler”, and I did my best to have our heroes reveal things that would matter to the main story, it definitely was a “side story” and was mostly just for fun (and it was intended to give my main artists a break). In the comment, I talk about why I made the choice to post it instead of simply going on hiatus for three months. I still think that was the right decision, but hopefully I will be able to avoid posting any more back-to-back bonus comics before the Engaging the Enemy arc is complete. When you are just posting up a couple pages of story a week, I think it’s just too confusing for a lot of folks. Lesson learned. 🙂

Anyway, I hope that makes sense about why we didn’t just jump back into Chapter 4, when Chapter 3 was complete. Why this isn’t intended as filler or a break. That these “bonus comics” are an essential part of the way I’m wanting to tell this story. I’ll try to come up with something for the FAQ that summarizes this a bit. (Maybe I’ll also come up with a better name for these flashback chapters than “bonus comics” — I think that probably adds to the confusion.) And, like I said, if you could help spread the word to your friends who might be confused, or think that we’re never going back to the main story — if you could tell them that this is actually primary and planned The Young Protectors story content, and that we’ll be jumping right back in with Chapter 4 as soon as it’s complete, I’d greatly appreciate it. (And if you happen to be enjoying the Flyboy Comic, please tell them that too — couldn’t hurt.)

Thanks for listening and, as always, for your continued, amazing support and enthusiasm. It makes all the hard work totally worth it. 😀

So! Flyboy’s communicator is broken! Kanya cell phone isn’t working, either! There’s not going to be any backup, any cavalry coming in to the rescue. What does Flyboy think he’s going to do? And does it have a chance in Hell of working before the city is ripped to shreds?