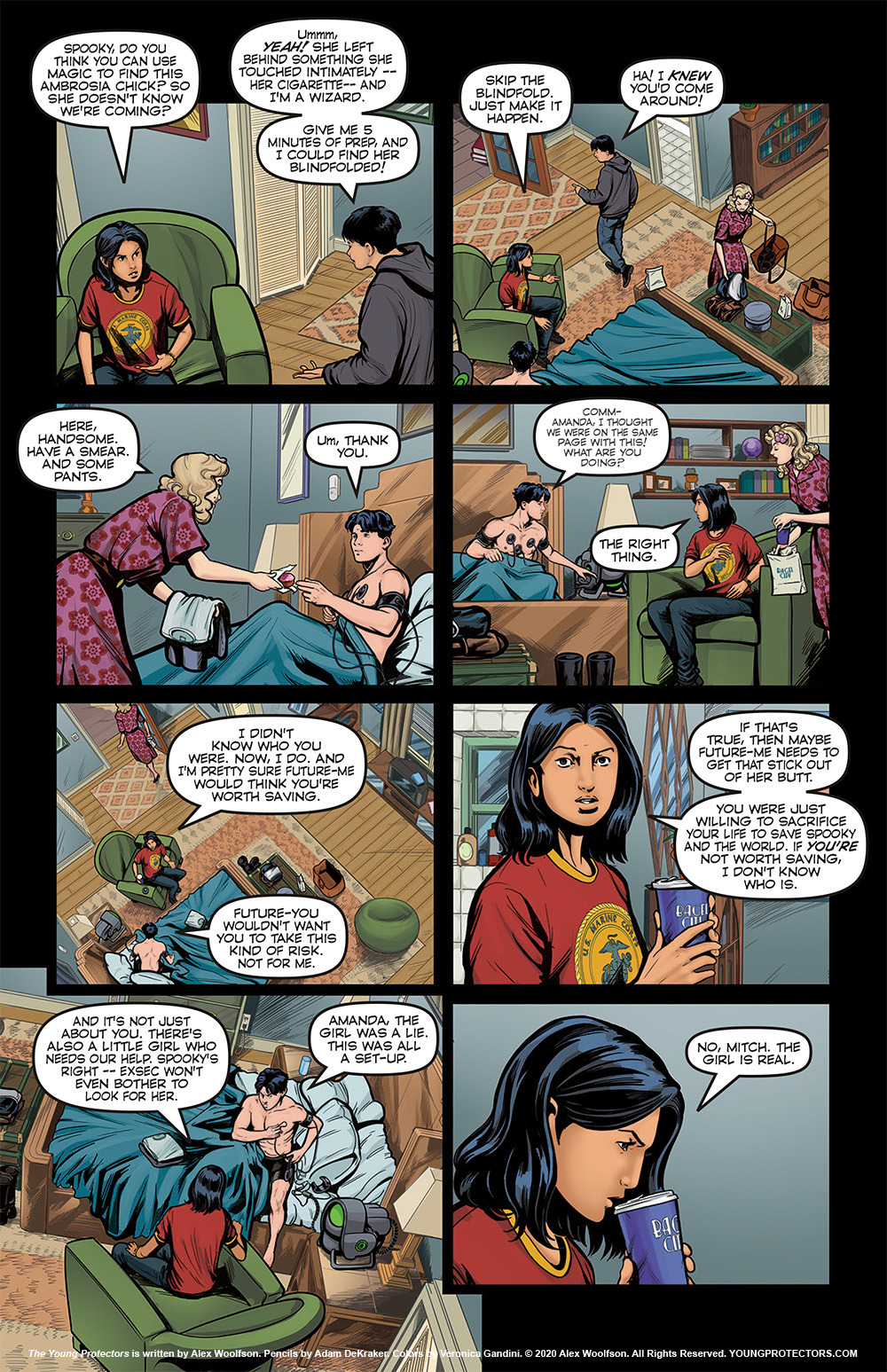 SPOOKY, DO YOU THINK YOU CAN USE MAGIC TO FIND THIS AMBROSIA CHICK? SO SHE DOESN’T KNOW WE’RE COMING?

Ummm, YEAH! SHE LEFT BEHIND SOMETHING SHE TOUCHED INTIMATELY — HER CIGARETTE — AND I’M A WIZARD.

GIVE ME 5 MINUTES OF PREP, AND I COULD FIND HER BLINDFOLDED!

HA! I KNEW YOU’D COME AROUND!

HERE, HANDSOME. HAVE A SMEAR. AND SOME PANTS.

COMM- AMANDA, I THOUGHT WE WERE ON THE SAME PAGE WITH THIS! WHAT ARE YOU DOING?

I DIDN’T KNOW WHO YOU WERE. NOW, I DO. AND I’M PRETTY SURE FUTURE-ME WOULD THINK YOU’RE WORTH SAVING.

FUTURE-YOU WOULDN’T WANT YOU TO TAKE THIS KIND OF RISK. NOT FOR ME.

IF THAT’S TRUE, THEN MAYBE FUTURE-ME NEEDS TO GET THAT STICK OUT OF HER BUTT.

YOU WERE JUST WILLING TO SACRIFICE YOUR LIFE TO SAVE SPOOKY AND THE WORLD. IF YOU’RE NOT WORTH SAVING, I DON’T KNOW WHO IS.

AND IT’S NOT JUST ABOUT YOU. THERE’S ALSO A LITTLE GIRL WHO NEEDS OUR HELP. SPOOKY’S RIGHT — EXSEC WON’T EVEN BOTHER TO LOOK FOR HER.

AMANDA, THE GIRL WAS A LIE. THIS WAS ALL A SET-UP.

NO, MITCH. THE GIRL IS REAL.

The struggle is also real.

Please note: These are work-in-progress colors. Vero should get me the final colors soon.

You can talk about this page at The Young Protectors Community here.

(Disqus comments are still at the bottom of this web page!)

Diversity and human rights, social justice, are hugely important to me. It’s why I do what I do. Why I create these stories. And, over this month, I’ve been deeply affected by the murders of George Floyd and Ahmaud Arbery.

But I haven’t said anything about that yet. Not here, anyway.

Part of the reason for that is that I want to be helpful. Constructive. And I have been so angry and outraged, I haven’t known what to say.

And a lot of it is that I’ve felt like my voice wouldn’t matter. Wouldn’t change the things that need to be changed.

Maybe some of you feel that same way, too.

With all that’s been going on this year, it’s easy to feel overwhelmed. Small. And like the forces of evil not only have the upper hand, but somehow have more enthusiastic supporters than you ever thought could be possible.

And yet… there are thousands and thousands of people, marching in the streets, day after day, exposing themselves to great danger, because wrong is wrong, and they won’t be silent about it.

They won’t be silent about black people being murdered, by their neighbors, and by the very people who are supposed to protect them. Again and again.

And one of your fellow readers, Lee, wrote to me this week to ask about my silence on this. To talk to me about it. To encourage me to say something. That’s just one voice. And I know it made a difference. Because it guided me out of my silence to talk to you here.

There are things I can do to make a difference. Like for most of us, many of those choices and changes will be in my own personal life. But I’m here, in this moment, in front of you, as a comic book creator. So, that’s what I’ll talk about for now.

I believe in the power of dreams. Of story. That the first step towards making true, deep, systemic change is to see it in your head. To believe it’s possible. A real option.

It’s why I wanted to tell stories with gay heroes. Stories with real heroes, who, after facing adversity, are able to find love. Because I didn’t see that when I was growing up, and for the longest time, I questioned whether it was even possible for two men to fall in love. Let alone be heroes.

And the first step for me believing it could be different was the stories I told myself. And those made me believe it a little. And then, when there were other stories, by other authors, I believed it more. And that belief gave me the courage to make changes in my life. To take action. To find love. Like a person who actually mattered. Because I was a person who mattered, even if the stories I first grew up with told me the opposite

I needed new stories. And things got better when I found them. And when I made them myself.

Showing diversity in our work here is very important to me. For that reason. But I’ve been asking myself how I can do more specifically with representation of black heroes in my own stories. This is a question that’s been growing in my mind for a while, but especially now, it’s time to move into action.

One of the corners I’ve painted myself into is that I’ve already established that the heroes with the darkest skin on my team are straight. That wasn’t a conscious choice, but since it’s important to me to focus on positive gay romance main plots and subplots, it’s led me to give the other characters much more “screentime.”

That needs to be different.

Whether that means introducing some new heroes or giving poor Fluke the time he’s due is something I’m still trying to figure out. Since I plot years in advance, everything in my webcomics happens at a glacial pace in terms of big changes.

But it’s a change I need to make.

And I’m a writer. Comics are slow. But there are other ways for me to tell stories. And I have some ideas of other ways I can get stories out there with black heroes much more quickly. So that’s some of what I’ll be doing with my work.

But it won’t be the only thing. For one, I can elevate other creators’ works. Black creators who are already telling great stories with black heroes.

I think it would be useful for everyone in the comments to take a moment to reflect on all the ways we can make things better in terms of social justice, right now, especially for black people. For those of us who aren’t black, what ways we can be better allies and forces for change. Ways for us to choose action instead of despair.

But, in particular, please let me know about those other stories. I’m just one voice. But many voices make bigger changes, faster.

I’d like to amplify some of those voices. And, through doing that, maybe help change what people believe is possible. What matters. And thus, what world we all create together.

P.S. In a stroke of good timing, since I wrote the first draft of this, the Comic Book Legal Defense Fund just released an Anti-Racism Graphic Novels Reading & Resources List. It covers a lot of ground, but I find the section on Speculative Fiction particularly intriguing. Definitely check it out.

P.P.S. Also, in addition to these other works, I strongly recommend you read Stuck Rubber Baby by Howard Cruse. It has a dumb, off-putting title but is, in fact, a masterpiece graphic novel that explores both queer issues and race. The creator was white, as is his “hero,” but I absolutely believe it is essential reading for every thinking person, especially now. CBLDF had this to say about it today.

P.P.P.S. Oh, and if you haven’t seen Spider-Man: Into the Spider-Verse , go do that right now. It features and African American/Puerto Rican hero, is available on Netflix right now, and is one of the best superhero movies ever made. Period. Full stop.

The only reason I’m able to keep making The Young Protectors is because of the very generous support of readers like you on Patreon. Especially now. And even though there have been those who needed to step back from their support last month, we had an incredible 13 new folks sign up over the last few days! Superheroes rushing in at the last second! So, please join me in sending out a very special thank you and welcome to the new members of the Woolfpack this week!

And let’s also please thank totally awesome readers who were already Patrons, but who upped their pledge this week:

Carlos B. and Isa L.

(Thank you so much, Carlos and Isa!)

Thank you all so much for your amazing support! You and the other members of the Woolfpack are all the real superheroes of this comic!

So! Amanda is now onboard the Save Mitch train! She’s even sent Spooky off to track down Ambrosia. But it sounds like Flyboy will need more convincing.

Is the missing girl actually real? Will that be enough to get Flyboy to participate in his own rescue? And how badly do you think Cassidy wants to be caught up on all the drama she missed?

Comments From The Young Protectors Community