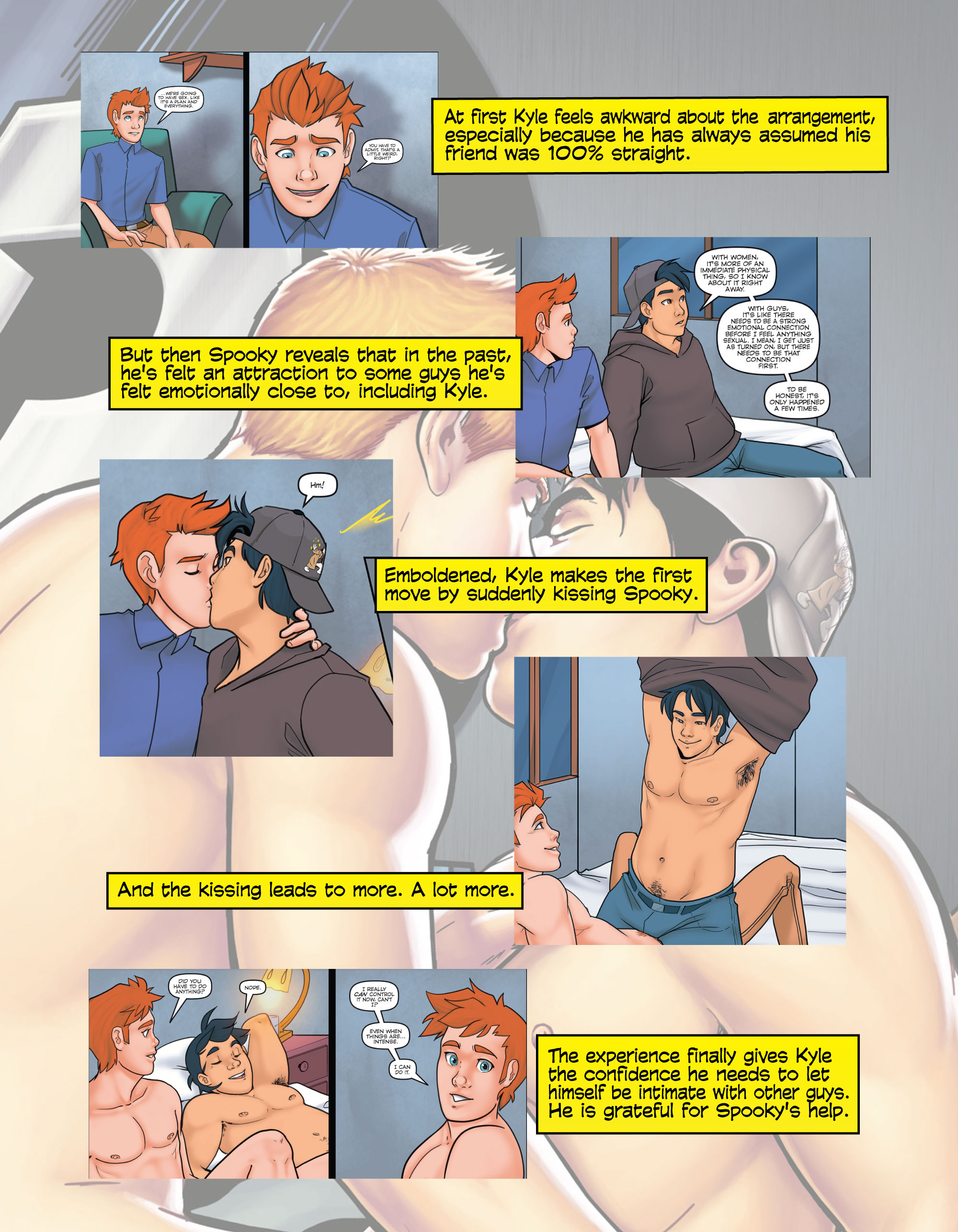 You’re about to start the next arc of The Young Protectors—“Spooky Jones: Past Sins”!

But I created this short summary to get you completely up to speed.

In between “Engaging the Enemy” and “Spooky Jones: Past Sins,” I made a sexy, two chapter, Patreon-only bonus comic called “Legendary.” You don’t need to read “Legendary” to fully enjoy “Spooky Jones: Past Sins.” This short, 4-page summary tells you everything you need to know. And just like “Engaging the Enemy,” the new arc is “safe-for-work” and available for everyone to read, in its entirety, for free, here on this site.

Just click Next, the right-arrow on your keyboard, or on the comic page itself to continue! (Just like the regular webcomic.)

If you want to read my one and only 18+ comic—76 full-color pages of  Spooky and Kyle’s first time together, which show everything—you can join me on Patreon here and start reading “Legendary” here.

(On the fence? This page shows all the benefits you would get by joining me and your fellow readers as a member of the Woolfpack on Patreon.)

“Spooky Jones: Past Sins” continues the epic super-hero action and drama from “Engaging the Enemy,” and it takes place just a few months after the end of that story. In “Past Sins,” Spooky faces off against his most dangerous foe yet. Its pages reveal secrets from Spooky’s time in Hell, things that he hasn’t even told his closest friends. And, of course, you can read the entire thing for free!

But first, I’ve included a little summary of a bonus comic I created for our Patrons, called Legendary.

Why did you create “Legendary”?

Well, after we finished  “Engaging the Enemy,” our main Young Protectors linework artist, Adam DeKraker, requested several months off. Because we had worked very consistently on The Young Protectors for almost 5 years at that point, I was, of course, happy to give him that time.

But The Young Protectors is a webcomic, and I didn’t want to just go silent while Adam took his break. Especially for our most dedicated readers. So this gave me an opportunity to try something I’d never tried before.

As you know, in the main comic and its side stories, we don’t show full nudity and explicit sex. But for years, I’ve received requests to show sexier content. And while, in general, I prefer to focus on plot- and character-based stories, and create comics that everyone can read, I was up for trying something new. 🙂

Also,  The Young Protectors is my full-time job and I pay my artists a full day rate. They only way I’m able to keep making this comic is with the support from readers like you on Patreon. I hoped that by offering an exclusive and unique 18+ story, it would also encourage more people to give Patreon a try.

So, I took advantage of this time to come up with a fun, emotion-filled, and smoking hot two chapter, Patreon-only bonus comic of Spooky and Kyle’s first time together—”Legendary“!

Our main colorist, Veronica Gandini, continued her awesome work throughout the “Legendary” comic. But since Adam was on his break, I hired two excellent guest artists for “Legendary” — Julie Wright and Tana Ford— to create the line art.

Julie Wright had already worked on two of our side stories, “Truth or Dare” and “Interlude 2,” and was also the main colorist for Lora Innes’s “The Dreamer.”  She created the linework for Chapter One with her sweet, anime-inspired style.

For Chapter Two, comic expert Justin Hall introduced me to a new artist, Tana Ford who, like Adam, has worked for the mainstream comics publishers and has a more Western style. Here is her bio:

Tana Ford is an award winning artist who is probably best known for her run on Marvel’s Silk. She has done work for IDW, Marvel, Vertigo and WIRED magazine, including titles like Star Trek, Jem and the Holograms, Spider-Man, Venom and Black Panther. Tana’s creator-owned lesbian comic book series “Duck!” won a Queer Press Grant in 2010 while the sequel “Duck! Second Chances” was a finalist for the Lambda Literary Award (the same year I was a finalist with Artifice, actually!)

Working with both these artists was an awesome experience. Julie and Tana are total pros, and it was definitely a lot of fun for me and Adam to see Kyle and Spooky interpreted through the eyes of different artists!

There will eventually be a book

Both of Legendary’s two chapters will be collected in a super-sized, 8.5″ x 11″ trade paperback (like Artifice).

I don’t have a timeline on when that book will be released. (Volumes Two and Three of “Engaging the Enemy” come first.) But if you can’t support my work on Patreon right now (and you’re over 18 years old, of course), you’ll be able to buy “Legendary” in book form and read the story that way.

But you don’t need to have read “Legendary” to enjoy “Past Sins”!

Almost all of Legendary’s 76 pages are sexy times, so you can get all caught up on any plot stuff by reading this short summary, starting on this page.

So, if you want to see uncensored sexy times with Spooky and Kyle (and help me continuing making The Young Protectors!), you can join me on Patreon here and start reading “Legendary” here.

But if you just want to get on with the main story after “Engaging the Enemy,” just click Next or on the comic page itself to continue. (Just like the regular webcomic.)

After the Summary, you’ll roll right into Spooky’s most dangerous adventure yet—in “Spooky Jones: Past Sins”!