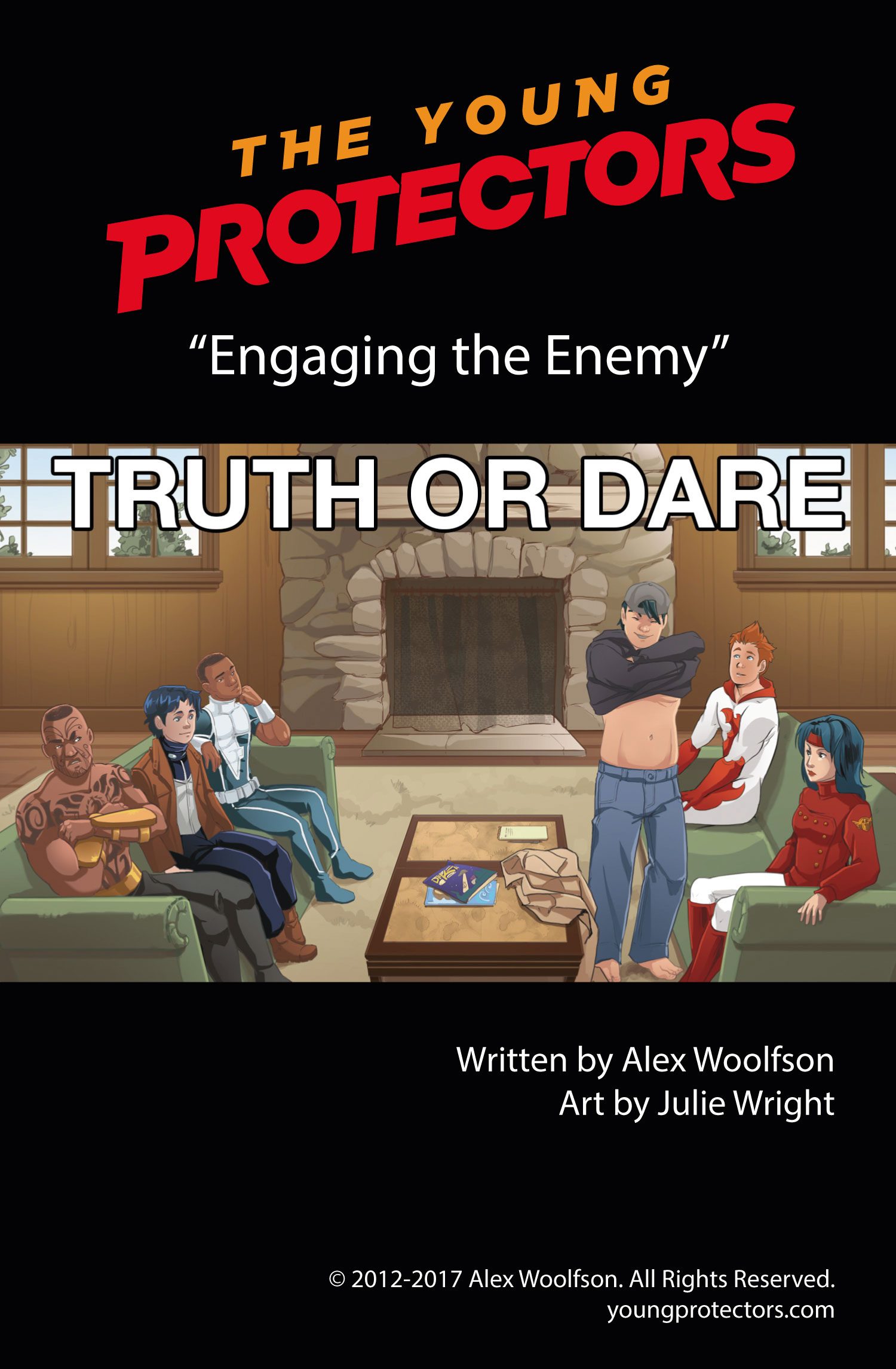 As I mentioned on the last page of Chapter 3, I’ll be posting up a special Truth or Dare Bonus Comic twice a week for the next few months. This story is canon and part of the main Engaging the Enemy arc—so it’s not “filler”—but it will allow us to have a bit of sexy fun while Adam and Vero are building up a buffer of pages. I’m working with a new artist on this one—Julie Wright, so I hope you’ll all welcome her to the TYP team. 🙂

Because I wanted to start this comic right with the action (and needed to keep the number of pages from being too crazy long), I’ve decided to share the set-up with a prose summary. If you really want to be able to understand what’s going on (such as what the “Curse” is and why Spooky is taking his clothes off), please be sure to read this:

The events of this “Truth or Dare” bonus comic take place a month before the Prologue of the Engaging the Enemy arc and are set in a safe house that Spooky put together years ago. The Young Protectors have just arrived together at Spooky’s cabin, fresh from a mission that had taken a dark turn.

Instead of engaging in their usual search and rescue efforts, The Young Protectors had done something very different. For the first time, Spooky Jones had requested his friends’ help to take down an insane and dangerous mage he’d been tracking. It was their first combat mission as a team and it went surprisingly well, except for one thing: as the mage fell into the Pits of Limbo, he was able to hit them all with the only deadly spell he knew – the Veritas Curse.

On their way to the safe house, Spooky had explained what they were up against: “The Veritas Curse was developed during the Inquisition and its rules are very specific. You have to answer questions in a ritual setting. Questions you don’t want to answer. If you answer those questions absolutely truthfully, the curse is lifted. If you don’t, you die a horrible and painful death by sundown. No exceptions, no loopholes.”

But there was an upside to this particular spell: the Inquisitors didn’t want you to know what you had revealed. So as soon as you’ve complied with the terms, you forget everything that’s happened from the first light of dawn on the day the spell was cast.

“All of us were cursed,” continued Spooky. “That means that the moment we’re all ‘cured,’ we’ll forget everything that was said and done during the ritual.”

“So no consequences!” Fluke was still high on their first win as a team against a bad guy. “This should be easy!”

The rest of the team was not so sure.

As they entered the cabin, Spooky continued to describe the history of the Curse and that it was designed to be flexible: all that was needed was a formal structure to make it clear that honest answers are expected, something with clear rules and punishments.

“You mean something ‘easy,’” said Tsunami. “Like a torture session, with a rack and thumbscrews.”

Amusement lit up Spooky’s eyes. “If you’re a traditionalist…”

It was Fluke who suggested a novel approach to the cure: that they ask their questions in a game of Truth or Dare.

“It’s got a clear structure with rules and penalties. Hey, if we have to do this, no reason we can’t have some fun with it, right?”

Spooky agreed that that would actually work, but Commander immediately set down some ground rules:

“Just because there won’t be any memories doesn’t mean this is harmless. I’m declaring some topics off limits. We don’t ask about people’s sex lives. We don’t ask Spooky about his time in Hell.”

Fluke cocked an eyebrow. “If we can’t ask Spooky about his sex life or his time in Hell, that pretty much eliminates anything he hasn’t already shared with the whole world.”

Spooky shrugged. “You can totally ask me about my sex life, guys. I don’t have a problem with that.”

Spooky soon determined that they only needed to answer one difficult question each to be cured. And then, because they’d forget about everything that happened that day, Kyle wrote down a short note describing their win against the mage and why they all came to Spooky’s safe house. That way they wouldn’t be confused when it was over.

Fluke started off the ritual by asking Spooky a classic Truth or Dare question:

“Paul, I’m sure it’s a great question, but I actually don’t think there’s anyone I would want to throw off a cliff…”

“You could take the dare…”

Fluke then dared him to spend the rest of the game in just his underwear.

Spooky took the dare and our comic begins.

So, that’s our little prologue summary. I hope you enjoy this comic and getting to know our heroes a little more intimately! Just click Next to begin! 🙂