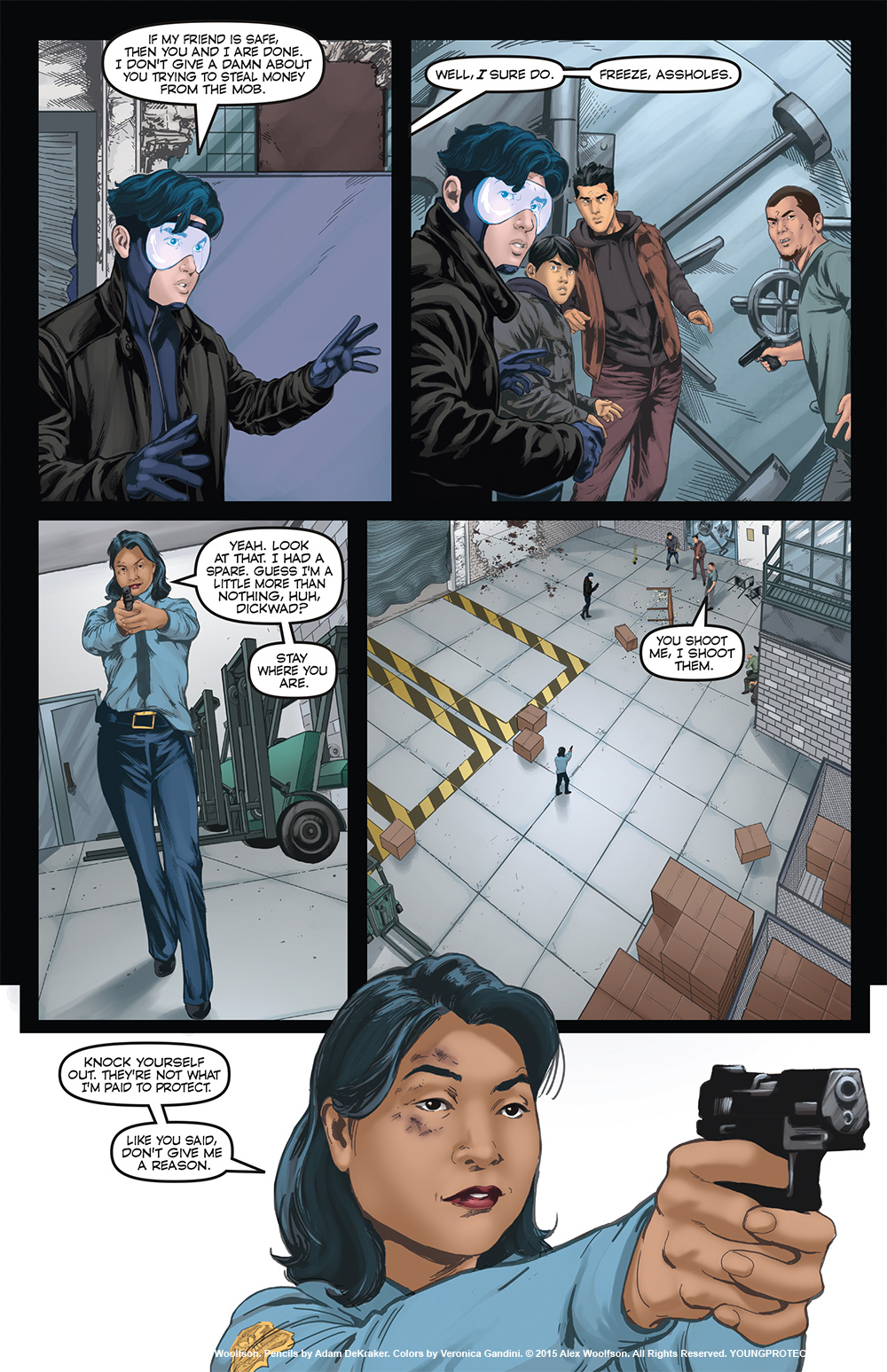 IF MY FRIEND IS SAFE, THEN YOU AND I ARE DONE. I DON’T GIVE A DAMN ABOUT YOU TRYING TO STEAL MONEY FROM THE MOB.

YEAH. LOOK AT THAT. I HAD A SPARE. GUESS I’M A LITTLE MORE THAN NOTHING, HUH, DICKWAD?

STAY WHERE YOU ARE.

YOU SHOOT ME, I SHOOT THEM.

KNOCK YOURSELF OUT. THEY’RE NOT WHAT I’M PAID TO PROTECT.

Over at the Patreon page, $5+ backers got a chance to download a cool pin-up of Fluke in action. It was a lot of fun trying to come up with a way to show Fluke’s powers visually. Comments included: “Great job showing the combination of Fluke’s powers and athleticism!”, “I love the intricacy of this piece.  At first glance it’s just a super cool action shot, but after looking a little longer I could make out the chain reaction of how it all happened.  There was obviously a lot of thought put into this bad-assery,” and “Awesome! This really is a good exploration of the sorts of things a “luck” based power might be useful for. A water bottle gets thrown in the air, where it stops the hatted thug’s knife and makes the other thug slip over; meanwhile, two thugs mis-aim and hit each other instead of Fluke. And in the middle of all that, Fluke shows off his natural athleticism and rippling, rock-hard thighs. Mmm.”

Here’s a sneak preview of that: Also, one last shout out before the month is over and it’s too late: I’m going to be sending out a high-res version of Flyboy’s Romance card art to this month’s $10+ backers of my Patreon page. Here’s the sneak peek of that:

And all backers will be sent a digital wallpaper of the Full Monty Spooky pin-up ($10+ backers get sent a high-res version too with double the resolution) once Patreon lets me know their payments have cleared. Here’s the sneak preview of that: So! Kanya’s back and she’s going to be the one giving the orders now! Or is she? Will she be an ally to Flyboy? How will Ivan react to her return? And what dance move is Diego pulling in the back of panel 2 and will he be willing to teach it to us?!