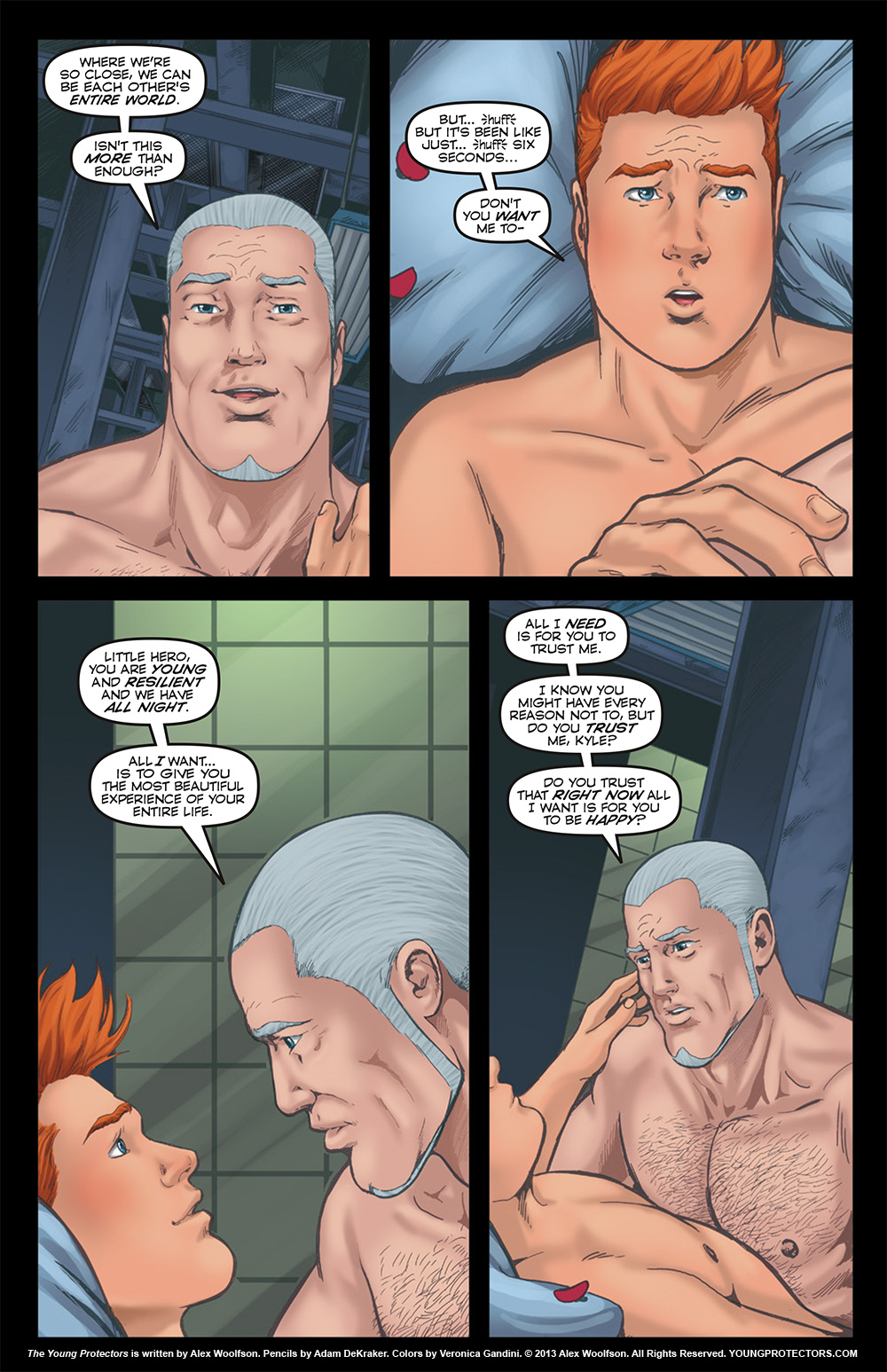 WHERE WE’RE SO CLOSE, WE CAN BE EACH OTHER’S ENTIRE WORLD.

ISN’T THIS MORE THAN ENOUGH?

DON’T YOU WANT ME TO-

LITTLE HERO, YOU ARE YOUNG AND RESILIENT AND WE HAVE ALL NIGHT.

ALL I WANT… IS TO GIVE YOU THE MOST BEAUTIFUL EXPERIENCE OF YOUR ENTIRE LIFE.

ALL I NEED IS FOR YOU TO TRUST ME.

I KNOW YOU MIGHT HAVE EVERY REASON NOT TO, BUT DO YOU TRUST ME, KYLE?

DO YOU TRUST THAT RIGHT NOW ALL I WANT IS FOR YOU TO BE HAPPY?

Oh, thank God — they’re back to talking again! It might not be a robot ninja attack, but at least it makes sense! I don’t know if any of you read the comments on the last page but it seems like there’s even weirder stuff than thingy-smushing. I won’t even tell you what some folks thought was going on, but let’s just say, it’s not even supposed to work unless someone’s legs are at least at a “45 degree” angle! You might convince me that there’s something fun about naked wrestling — maybe — but if these so-called “fun times” have to involve geometry and protractors and stuff, then count me out! My head’s spinning enough already! O_O

Speaking of math, my plan was to write up a huge long little essay about your awesome responses to the survey, but then work exploded. I’m at the end of another ten hour day and a full essay is beyond my powers. So, maybe it’s best if I tackle this in bite-sized chunks. I’ve now closed the survey, so let me just share a few details and perhaps I’ll share some extra-interesting details in future posts (like what percentage of respondents identified themselves as straight males, which is something I know a few of you are curious about. 😉 ) The survey received 8,387 responses (almost all of them during the first week when I was linking directly to the survey here.) Interestingly (and in fact very consistent with what I learned in my statistics class), the percentage numbers barely changed once 400 of you had responded. Here’s how things broke down:

So, those are the overall results! But what happens if we just look at specific age-groups or genders? Tune in for the next note to find out! While the results didn’t surprise me — I already knew we had an awesomely diverse group! — I did find them interesting. I hope you did too. Thank you so much for participating! I’ll look forward to having another survey in the future!

Our seventh bonus page in a row! And look below! We’re already at $238 towards the next bonus page!

Big hugs go out to long-time friends of The Young Protectors Lisa J. and Martin K. for their super-generous $25 donations! And this makes both Lisa’s and Martin’s third super-generous donations to this comic! Thank you so much, you two!

Tune in this Saturday to find out! Hope to see you there!