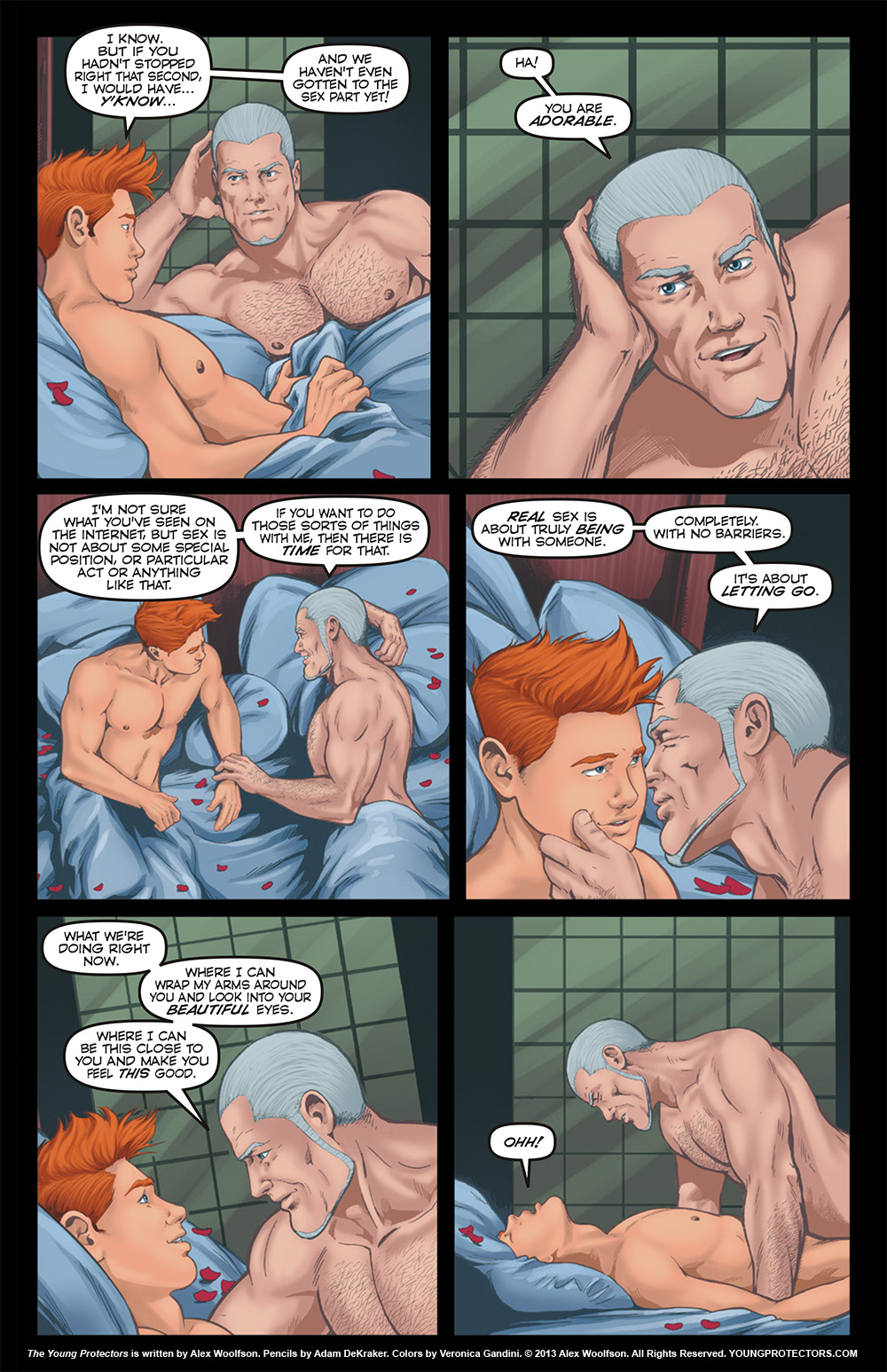 I KNOW. BUT IF YOU HADN’T STOPPED RIGHT THAT SECOND, I WOULD HAVE, Y’KNOW…

AND WE HAVEN’T EVEN GOTTEN TO THE SEX PART YET!

I’M NOT SURE WHAT YOU’VE SEEN ON THE INTERNET, BUT SEX IS NOT ABOUT SOME SPECIAL POSITION, OR PARTICULAR ACT OR ANYTHING LIKE THAT.

IF YOU WANT TO DO THOSE SORTS OF THINGS WITH ME, THEN THERE IS TIME FOR THAT.

REAL SEX IS ABOUT TRULY BEING WITH SOMEONE.

COMPLETELY. WITH NO BARRIERS.

WHERE I CAN WRAP MY ARMS AROUND YOU AND LOOK INTO YOUR BEAUTIFUL EYES.

WHERE I CAN BE THIS CLOSE TO YOU AND MAKE YOU FEEL THIS GOOD.

All right. So I’ve come to terms with the fact that I’m not getting ninjas or giant robots in this scene. (Which I still feel is a missed opportunity but, you know, WHATEVER!) So I might as well try to understand what’s going on here. Now, at this point, both Kyle and The Annihilator are completely naked, right? And it seemed like they were wrestling… or something… But now I’m thinking they are smushing their, um, thingys together and that makes them feel… good? Am I understanding that correctly? And so that’s why they’re not fighting robots right now? I’m really trying to understand this kissy stuff so please let me know if I’m reading this wrong!

We have some new Fan Art from long-time friend of The Young Protectors Frenchie! It’s The Annihilator on a throne… of tentacles! You definitely need to check it out!

And I know I said I was going to sum up some interesting results from the survey tonight, but I’ve been having some really wonky computer problems today (le sigh), so with your permission, I’ll hold off on that until next time. I want to be able to do it justice.

I am, however, excited to say we had our sixth bonus page on Wednesday and then you immediately turned around and tipped over the donation bar to make sure we’re going to have a bonus page next Wednesday too! And look below! We’re already at $144 towards the bonus page after that!

Big hugs go out to new friend of The Young Protectors Sensational S. and also to long-time friends joshua G., Robert B., Cassandra S. & Perrine S. for their super-generous $25 donations! And this makes Cassandra’s fifth, Perrine’s tenth, and both joshua’s & Robert’s twenth-ninth (!!) super-generous donations to this comic!

And finally superhero-strength hugs go out to long-time super-friends James A. and Sam B. for their amazingly generous $50 donations! This makes Sam’s second and James’s seventh amazingly generous donation to The Young Protectors! Thank you so, so much, James and Sam — you’re both totally awesome!

So! Comforting words have been spoken! Flesh has again been pressed against flesh! And it turns out The Annihilator has actually heard about this crazy, new-fangled tech called The Internet! Love, passion, revelations — what more could there possibly be to this scene?

Tune in next Wednesday to find out! Hope to see you there!