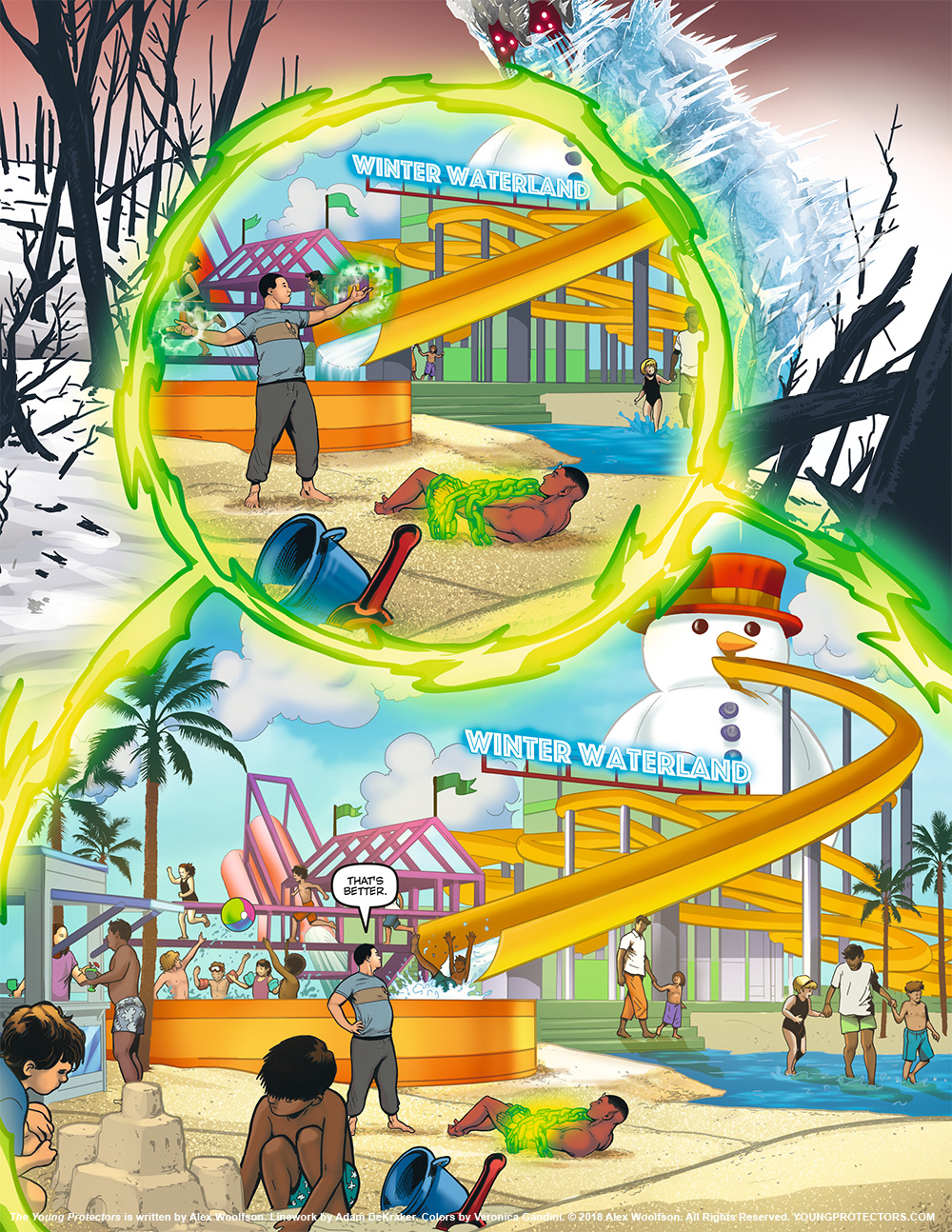 Spooky eye for the Hell guy.

I’d like to give a little shout out to The Young Protectors linework artist Adam DeKraker for “Winter Waterland” on this page. As you know, story and words are my department, and in the script page for this, I asked for Spooky’s transformation to create a “tropical water park” where Ikaroth is turned into “a water slide with a smiling, snowman face.” I hadn’t thought to give it a name, though. So when Adam sent me the first pass of pencils, and I saw what he added, I was over the moon. Perfectly fits Spooky’s punny nature and is very clever, I think. Just another example of how awesome it is to collaborate with Adam and Vero. 🙂

ALSO! Let me send out a very special Patreon anniversary thank you to those who have been my Patrons for 12 months as of this week (November 11-17)!

Patrons for 12 months as of this week:

Patron for 24 months as of this week:

Thank you all so, so much for your amazing, ongoing support! It’s the consistent support that makes Patreon so helpful to creators, and so essential to my ability to continue making this comic! You all are superheroes!

(By the way, a few Patrons have reached out to me, concerned that I might have overlooked Patrons who have supported this comic for longer than 36 months. After all, I started the Patreon in January 2015, and there have been awesome readers who have been supporting this comic since the beginning! Well, not to worry! I haven’t forgotten y’all. I was wanting to have this be a regular celebration of ongoing Patrons, which is why I’m focusing on Patrons who are having their anniversary with me in the given week. But in January, we will officially hit the anniversaries of Patrons who have been supporting me and The Young Protectors for 48 months — and I’m planning a big celebration when that happens. Stay tuned!)

So! Looks like Spooky is doing a little redecorating of “his world.” But Anaado is still there, in chains. What do y’all think of what he’s done to the place? And now that’s he’s put his own stamp on things—and shown that this really is his world—what do you think he’s going to do next?