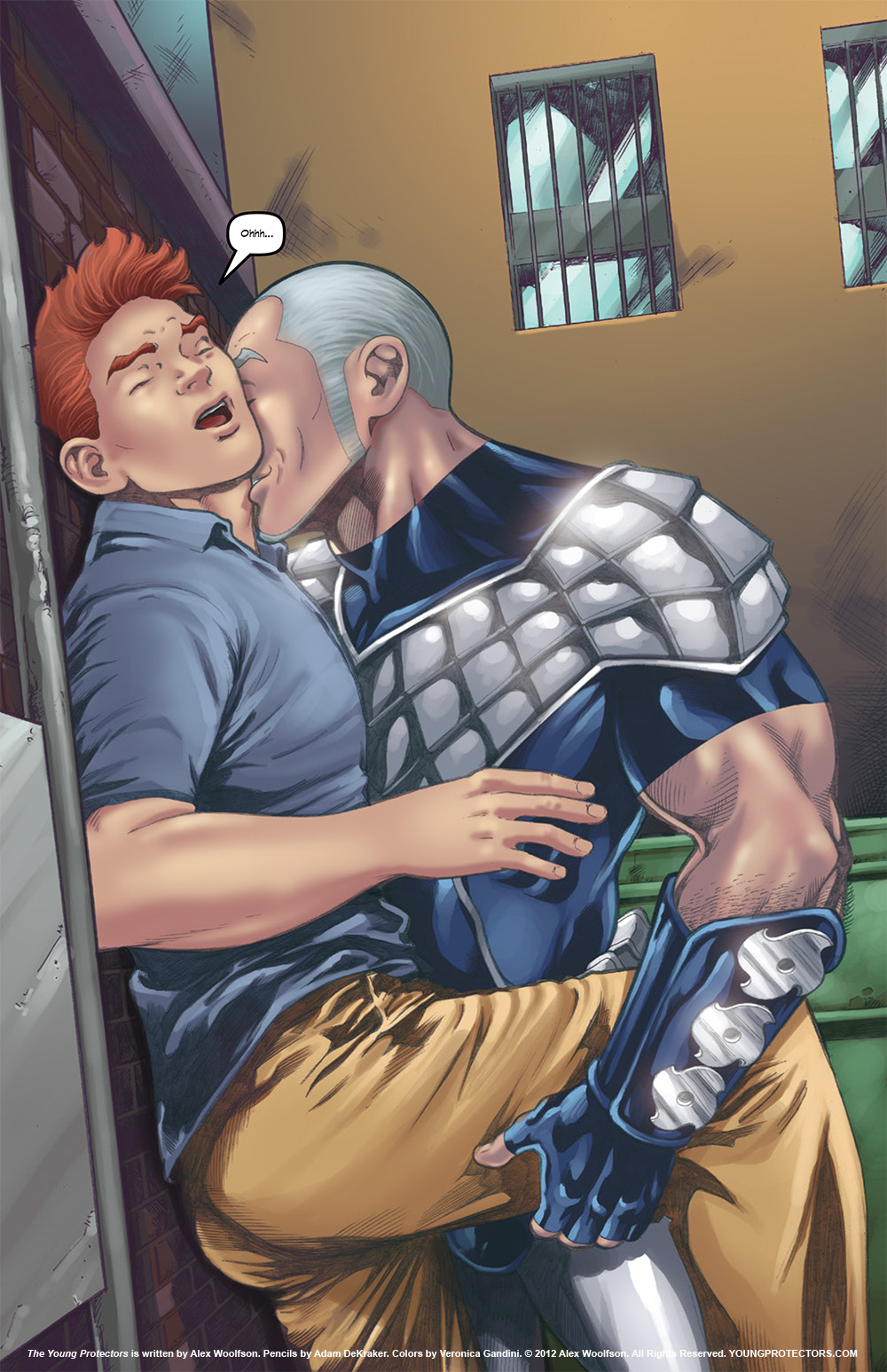 We have new Fan Art by Sepherr! It’s some shirtless, sexy kissing between Kyle and The Annihilator. Definitely, check it out!

And we’re now well over two-thirds of the way to the next bonus page! WOOT!

It’s a huge morale boost for us to get such an outpouring of donations and your support is deeply appreciated. Thank you all so much! 😀

Meanwhile, in the comments, the debate continues over the action taking place in this scene. In addition to some lingering concerns about Kyle’s age, some readers have also raised questions about whether showing a scene like this gives unnecessary ammunition to those hostile to same-sex relationships (I respond with some of my own thoughts to that concern here) and also whether including a scene like this with themes of questionable consent and blackmail in a work of fiction will have dangerous effects on people’s real world behavior, fostering “an environment that is permissive to sexual harassment, assault and rape”. (That’s an interesting question to debate to be sure but the controversy over media effects on behavior has been covered a lot elsewhere and is already being well-discussed by all parties in the comments section, so for that, I see no need to chime in. I do, of course, appreciate the overall respectful tone everyone is using to discuss these issues and have found much of what you’ve all had to say very insightful.)

One thing I will chime in on, though, is the question that some long-time readers of Artifice have raised about whether The Young Protectors will be a “a stereotypical BL romance story.” I’ve talked a little bit about that already in the comments, but I should probably do so here as well. While I’m not sure exactly how one should define “a stereotypical BL romance story”, I will say that that this six-chapter arc is not just going to be about whether these two guys get together, get it on and/or form a “canon relationship”. That, in fact, the stakes become much, much larger, even larger than the life-or-death stakes I presented in Artifice, except unlike Artifice I have many, many more pages to build those stakes.

The Young Protectors came to fruition in a way that was quite different than how I usually approach my long-form writing. How exactly it came about is an interesting story for another time, but the end result is that this first chapter is essentially prologue. (In fact, I debated about whether I should actually label it “Prologue” here [instead of “Chapter One”]—and based on some of what I’m reading in the comments, if this story goes to print, I think I might do just that to avoid confusion.) So, while this scene does introduce these characters and set the stage for the main action—and is hopefully fun to read, at least for some!—it doesn’t give a great idea what the overall story is going to be about. Whether it was a wise choice to have a close-to-30 page prologue in a weekly webcomic, we’ll just have to see. But for those of you concerned that suddenly I’ve decided that building three-dimensional characters and dramatic tension are for the birds, allow me to reassure you, that is certainly not my intention. The Young Protectors starts out lighter in tone than Artifice and certainly more yaoi-flavored than Artifice, but this is still me with my own passions—there will be darkness, adversity, plot twists, heroism, affection and much, much higher stakes ahead.

Of course, none of this is meant to convince you that you should be enjoying The Young Protectors, if you are not. Or even that you should continue reading if it’s not holding your interest. My firm belief is that if a story isn’t working for a reader, the fault lies in the writing, not in the reader’s patience. While there were certainly readers of Artifice who at page 29 still thought it might turn out to be “some lame yaoi where the dominant guy subdues the prisoner, etc., etc.” (as one long-time commenter put it), my job as the writer is to hook you from the first page, not on the promise of potential rewards later.

But that said, I am again telling the kind of story I’ve always wanted to read. And if you have signed up for this ride, I can tell you that what you see here is just the tip of the iceberg of that story. This is our starting place. Much more is ahead. 🙂

Anyhoo! Debate and story-telling questions aside, there do seem to be some of you who are enjoying what’s happening in these pages and I’ve loved hearing from you in the comments. And on the next page, swear to God, my characters will use actual words.

Hope to see you there! 😀

Edit 6/19/12 11:55 PM: DING! DING! DING! DING! DING! DING! DING! It’s only been two weeks and thank to your generous donations, we’ve yet again hit the donation target. That means that in addition to the regular Saturday update, there will be a BONUS PAGE this Wednesday, June 20th—page 20! That’s in less than 12 hours! WOOT! Hope to see you there!