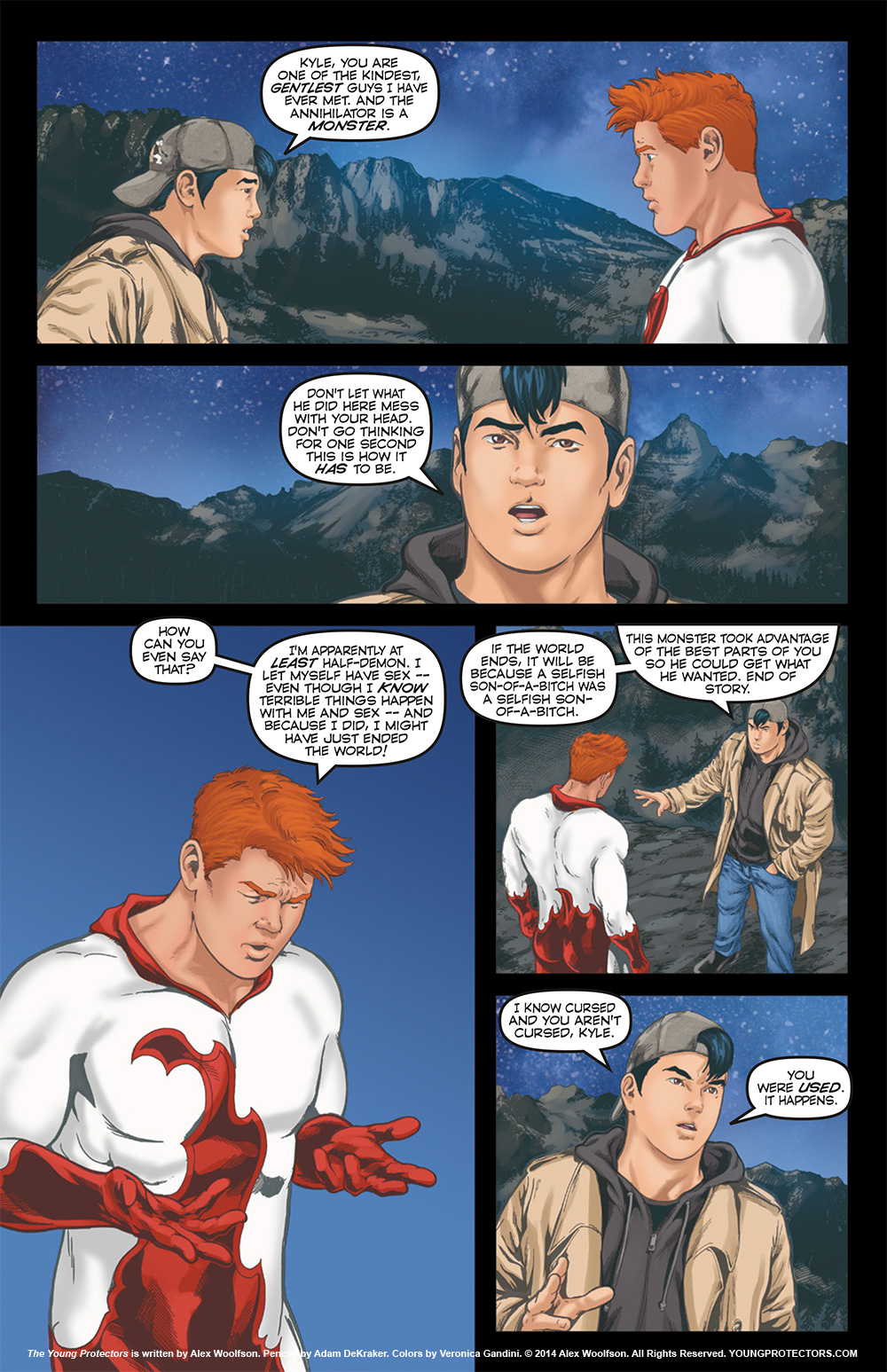 KYLE, YOU ARE ONE OF THE KINDEST, GENTLEST GUYS I HAVE EVER MET. AND THE ANNIHILATOR IS A MONSTER.

DON’T LET WHAT HE DID HERE MESS WITH YOUR HEAD. DON’T GO THINKING FOR ONE SECOND THIS IS HOW IT HAS TO BE.

HOW CAN YOU EVEN SAY THAT?

I’M APPARENTLY AT LEAST HALF-DEMON. I LET MYSELF HAVE SEX — EVEN THOUGH I KNOW TERRIBLE THINGS HAPPEN WITH ME AND SEX — AND BECAUSE I DID, I MIGHT HAVE JUST ENDED THE WORLD!

THIS MONSTER TOOK ADVANTAGE OF THE BEST PARTS OF YOU SO HE COULD GET WHAT HE WANTED. END OF STORY.

I KNOW CURSED AND YOU AREN’T CURSED, KYLE.

YOU WERE USED. IT HAPPENS.

My second-ever radio interview has just been posted online. Interviewer Rodger Nichols, in addition to having an awesome radio voice, really did his homework and asked questions no one else ever has. Great experience all around! It’s only about 20 minutes long so if you got a moment, check it out and let me know what you think!

Also, we have new Fan Art from Jeremy Thew, a spicy little riff on the Prologue and what the others might think if they knew. Do check that out too!

Now for a big announcement:

As you know, through the generous support of literally thousands of Kickstarter backers, I’ve been able to raise enough money to afford a print run of the first volume of The Young Protectors (which will include the Prologue, Chapter One and the Interlude.) As you might or might not know, one of the “stretch goals” that backers earned during the Kickstarter was the inclusion of a 27-page Bonus Comic in the printed book, focusing on the characters of Spooky and Commander. So, the book can’t be printed without it.

When we launched the Kickstarter project, Adam, Vero and I fully expected to be able to complete all the Kickstarter rewards while at the same time keeping up with the currently updating pages here on the site. And while Adam has been working very, very hard on the Bonus Comic during any free moment he has over the last months, it’s become clear that penciling a second comic while trying to maintain a consistent pace with our current webcomic updates is very difficult. With consistent bonus pages on the site (we’ve had over thirty in a row with this latest run), both he and Vero are having to deliver two new high-quality, fully-rendered comic pages every week. And while both were very enthusiastic about being able to work on all the Kickstarter rewards on top of their webcomic commitment when I launched the project—and both are still willing to work very long hours to try to do both things at once—creating two fully-rendered pages a week is pushing them to close to their limits.

I’ve done the math on this and if we continue at the pace we’re going at, the Bonus Comic won’t be completed until the end of the year. And then, it’ll take another three months on top of that for the books to get printed and shipped back to me once I send the files off. At that rate, the book won’t be printed any sooner than 2015, which is too long to expect the Kickstarter backers who pledged in 2013 to wait and, frankly, anyone else to wait. So, it’s time for a new strategy.

So, after considering all those different possibilities, none of which are awesome, I’ve come up with a fourth option: Once the currently running scene in the webcomic is finished, I’ll pause the current webcomic chapter. But, in its place, I’ll start posting up the Spooky/Commander Bonus Comic on the site.

Here’s how that would work: No matter what, once the current scene is finished, I’ll post up a new page of the Bonus Comic every Saturday, just like with the regular updates. And if y’all want to continue to support our work by donating for bonus pages, I’ll also post up a second page of the Bonus Comic on Wednesday. (But no matter what, Adam and Vero will continue to produce two pages a week of the Bonus Comic behind the scenes.) These Bonus Comic pages will be available to read for free on the site until all 27 pages have been posted and then they’ll be removed and the regular Chapter 3 webcomic pages will resume. (And if Adam and Vero are able to actually get ahead of the pages we post on the site, then that just means I’ll be able to send the files off to the printer that much sooner.)

While it’s not a perfect solution, I think it’s the best one. For one thing, I know no matter what that Adam and Vero can produce two high-quality pages per week without working themselves sick, so I can be sure the Bonus Comic will be finished as fast as possible while maintaining excellent quality. (It’ll be completed in a few months instead of a whole year.) And not only will it mean I wouldn’t have to pause page updates on the site, it’ll also mean my Kickstarter backers, who collectively pledged over $100,000 to this project, will get to enjoy a reward immediately—they’ll get to read the Bonus Comic pages as they are finished, no waiting. And, finally, it’s at least somewhat timely to share the bonus comic at this point in the overall current webcomic story, since questions are just now being raised about Spooky’s past and the Bonus Comic directly deals with some of those questions.

This wasn’t how I originally wanted to do things, but this Kickstarter project got pretty huge—much bigger than I expected—so I suppose it’s not surprising I’m going to have to re-think things now and again. Ultimately, I am responsible for making sure my Kickstarter backers receive every single one of the rewards I promised and that those rewards are awesome and delivered in a timely manner. I also feel responsible to the loyal readers who show up twice a week here not to put the whole Web site into mothballs for months while I work on the Kickstarter rewards. I take both responsibilities very seriously. And, in this case, being responsible requires me to realize when something isn’t working and to take action to get things back on track. Hopefully, the solution I’ve come up with seems reasonable and maybe even a little fun for y’all. You can let me know what you think in the comments. 🙂

Big hugs go out to long-time friend of The Young Protectors Robert B. for their super-generous $25 donation, their fifty-sixth super-generous donation to this comic!

So! Now we know what it is that Spooky wanted to tell Kyle. Will our red-headed hero be able to take that lesson-learned in? Or will he continue to view himself as twice-damned, and thus condemned to walk this Earth as a simple monk?