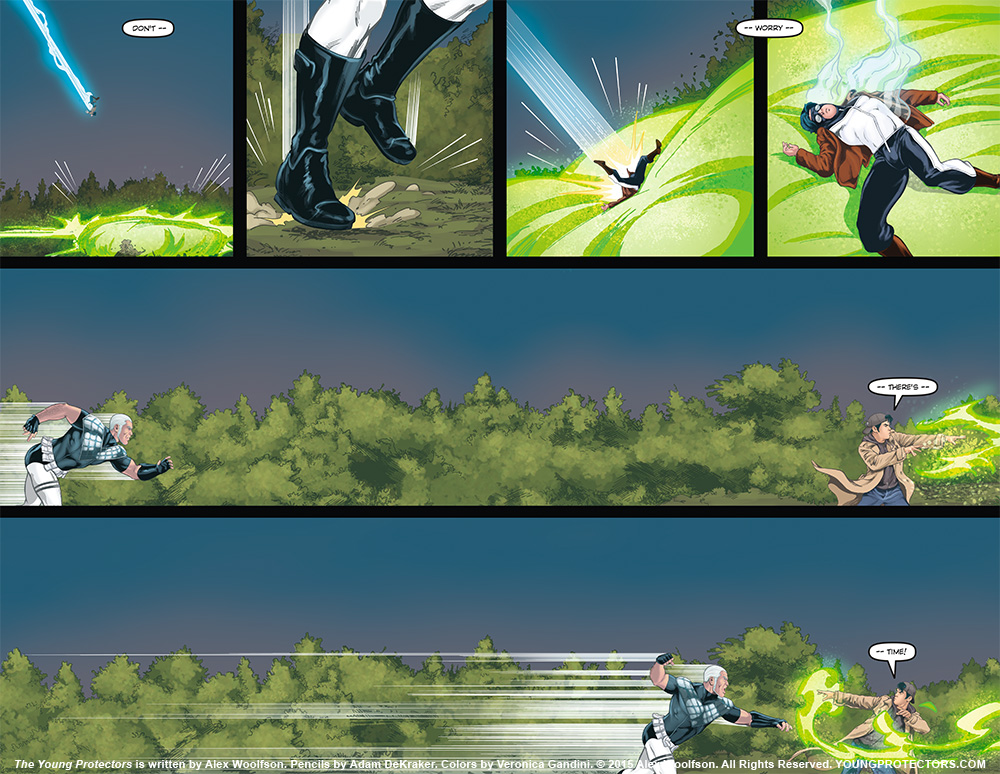 (In the book, this will be a double-page spread. You can see a larger version here.)

First off, thanks to the amazing, awesome support of the Patrons, I’ve now fully upgraded the site and thus, as a Milestone Goal, was finally able to create the single most-requested feature I’ve gotten since I began making webcomics: a bookmarkable link to the most current page. It’s looks like such a small thing but if you create a bookmark with it, it has the power to take you to the most current page of The Young Protectors in one click:

Also, you all have continued being totally amazing with the Patreon! Since the last update, we’ve gone up over $250/month to $4867/month in support! You are simply the best readers in the world!

That means that we’re coming up fast on the next Milestone Goal at $5000/month: a Patreon-Exclusive Wallpaper—that all Patrons get to vote on! If we hit this goal, Patrons will get a chance to vote for their favorite character and I’ll then commission one of my artists to create a Patreon-exclusive wallpaper featuring that character for all Patrons to enjoy!

So, that’s pretty cool. But the thing is, it’s going to take at least a few weeks for the votes to get tallied and for an artist to make the pin-up. And hitting $5000/month is just too big a deal for me to have my awesome Patrons wait so long for a reward. So, I’m sweetening the pot. In addition to starting the vote for this new wallpaper, I’ll also post up a NSFW, full-monty, fully nude pin-up of The Annihilator as a Special Digital Reward. He wasn’t included in the Sexy Height Chart for the Guys, so if you’ve been wondering about the exact size of the super-villain weenie that made Kyle’s jaw drop, or whether he is cut or uncut, you’ll now be able to find out. 🙂

And then at $5250/month, I’m adding a new reward. Y’all gave me such positive feedback on the “How Spooky Got His Cap” short story I wrote, I wrote a new one. This one will answer the question “What it’s like to kiss Spooky?”, it’s from the perspective of one of his teammates, and it’s totally canon. Have you ever wondered what kissing Spooky might feel like? If you’re a Patron and we hit this Milestone Goal, you’ll get to find out! (Oh, and just a heads up, this particular story is about 3x longer than the first one and actually got a bit steamy. All right, very steamy. You’ve been warned. 😉 )

Of course, an earlier Milestone Goal allowed me to start posting up the NSFW Full-Monty Digital Kickstarter Rewards as Special Digital Rewards. The full-color, “Full Monty” art shows full-frontal nudity of the adult characters of The Young Protectors, something that I’d never show on this site. And that meant, last Wednesday, I posted up the Sexy Height Chart of the Guys, which shows all the male members of The Young Protectors team lined up by height. Curious how our boys measure up? Wondering who’s cut and who isn’t? Now you can find out! 🙂 (But you’ll have to act quickly, because unlike the other rewards, I’m only going to be keeping NSFW rewards on the Patreon Page for 60 days before removing them.)

If you become a Patron now and choose to receive the Special Digital Rewards, you will be able to download a wallpaper version of the Sexy Height Chart. You’ll also be able enjoy all the other rewards so far posted, including the “How Spooky Got His Cap” short story that folks have liked so much. And, of course, Patrons who chose to get the Special Digital Rewards (which is the vast majority) continue to receive Digital Kickstarter Rewards every Wednesday and get to see special Sneak Previews on Sunday.

600 of you have already become Patrons in the last six weeks. There are lots of great benefits to being a Patron, and you’d really be helping me out if you became one too. If you’re enjoying our work here and would like to see it continue (and would like to get access to all kinds of special benefits!),

Finally, we have new Fan Art by Lineage comic artist, Chris Tsuda. It features all the main characters of The Young Protectors (including Laampros!) and it’s pretty cool. You should totally check it out! (Thank you, Chris!)

So! Usually I end my note with a bunch of questions. But this time, there’s really only one: is Spooky right? Is there, in fact, time?