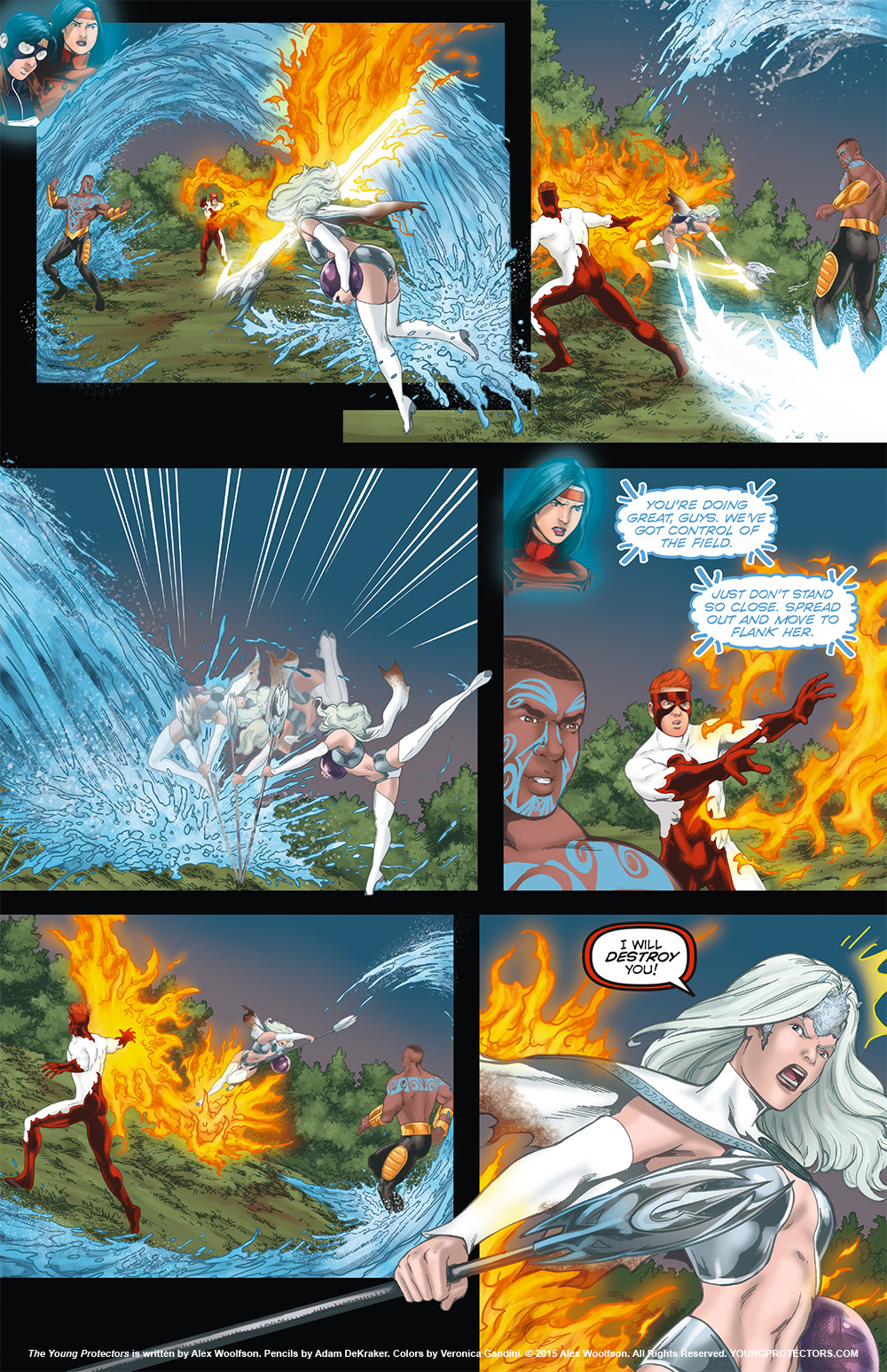 YOU’RE DOING GREAT, GUYS. WE’VE GOT CONTROL OF THE FIELD.

JUST DON’T STAND SO CLOSE. SPREAD OUT AND MOVE TO FLANK HER.

I WILL DESTROY YOU!

We’re now at $3169/month with 344 Patrons over at the Patreon Page! That means that the third Milestone Goal at $3000/month was triggered and The Young Protectors IS NOW OFFICIALLY A TWICE-WEEKLY COMIC! WOO HOO! You all are TOTAL ROCK STARS! Thank you all so, so much!

And because of the previously hit Milestone Goals, Patrons now get a behind-the-scenes look at Adam’s penciled page along with the regular comic update, and are currently receiving the Safe-for-Work Digital Kickstarter Rewards as Special Digital Rewards every Wednesday (last Wednesday was a full-color team action pin-up wallpaper called “Save the Night”.) That’s in addition to the Sneak Preview Sunday updates, where they got to see shirtless pin-ups of Fluke, and Flyboy, and just this Sunday got to see our buddy Spooky in just his boxers! (And people who become Patrons now and choose to receive the Special Digital Rewards will get to see all the art that’s been posted so far — so if you’re a Fluke, Flyboy, or Spooky fan or want to download the full-color Save the Night wallpaper, you won’t miss out!)

But wait, there’s more! More Milestone Goals, that is!

After sending out a survey to Patrons this weekend, I’ve changed up the Milestone Goals to better match what folks want. Here’s what’s coming up:

– Just $331/month away (at $3500/month), I’ll send out a Patron-Exclusive colorful wallpaper of The Young Protectors team, drawn anime-style

– Just $831/month away (at $4000/month), I’ll start sending out the NSFW, Full Monty Digital Kickstarter Rewards as Special Digital Rewards. I’ll also be including some NSFW Sneak Peek Sundays, so even the current Kickstarter backers will benefit from this

– And finally, at $4500/month, I will make the single most asked-for change to this Web site: I’ll create a bookmarkable link to the Most Current Page of The Young Protectors. It will take some work, but I’ve done research and I’m now convinced I can make this happen with my webcomic software. Y’all have wanted this since the early days of Artifice. If we hit this goal, you will have it!

There are lots of great benefits to being a Patron, over 300 of your fellow readers have joined in the last couple weeks, and you’d really be helping me out if you became one too. If you’re enjoying our work here and would like to see it continue (and would like to get access to all kinds of special benefits!),

Our eighty-first bonus page in a row AND OUR LAST BONUS PAGE EVER! (But that’s OK, because thanks to the Patrons, this comic has now officially become a twice-weekly comic!)

I want to send out superhero-strength hugs to everyone who ever contributed to the Donation Bar and made these Bonus Pages possible. Every creator has ups and downs, and your continual support has been a HUGE morale boost for me, Adam, and Vero, and has contributed to my ability to make these comics and tell these stories in a major and real way. I sometimes have a hard time believing that folks really will like my work, and without you, I would have doubted myself a lot more and taken a lot fewer risks, some of which have become your favorite moments in this story. Without you, I would never have started The Young Protectors at all, which involved hiring two artists who work professionally for Marvel and DC, something I couldn’t afford without your help. And without you, I wouldn’t have thought a Kickstarter, let alone a successful Patreon campaign, would be possible. You have made The Young Protectors into the comic it is today. I might have retired the Donation Bar below, but you’ll always be very special to me and dear to my heart. And I hope you can take some pride in knowing that you made all this possible. Thank you all so much! You really do ROCK!

And, as before, I also want to send out very warm thank yous out to all the new Patrons who have joined in the last few days. As you can see in the comments below, a bunch more folks have had a blue, silver, or gold YP badge added to their Disqus avatars, which means they are a Patron. If you see one of these folks, please join me in extending my thanks for directly supporting the making of this comic! And please also send out a special thanks to those exceptionally generous backers who are on the Leaderboard of Awesome page. You all ROCK!