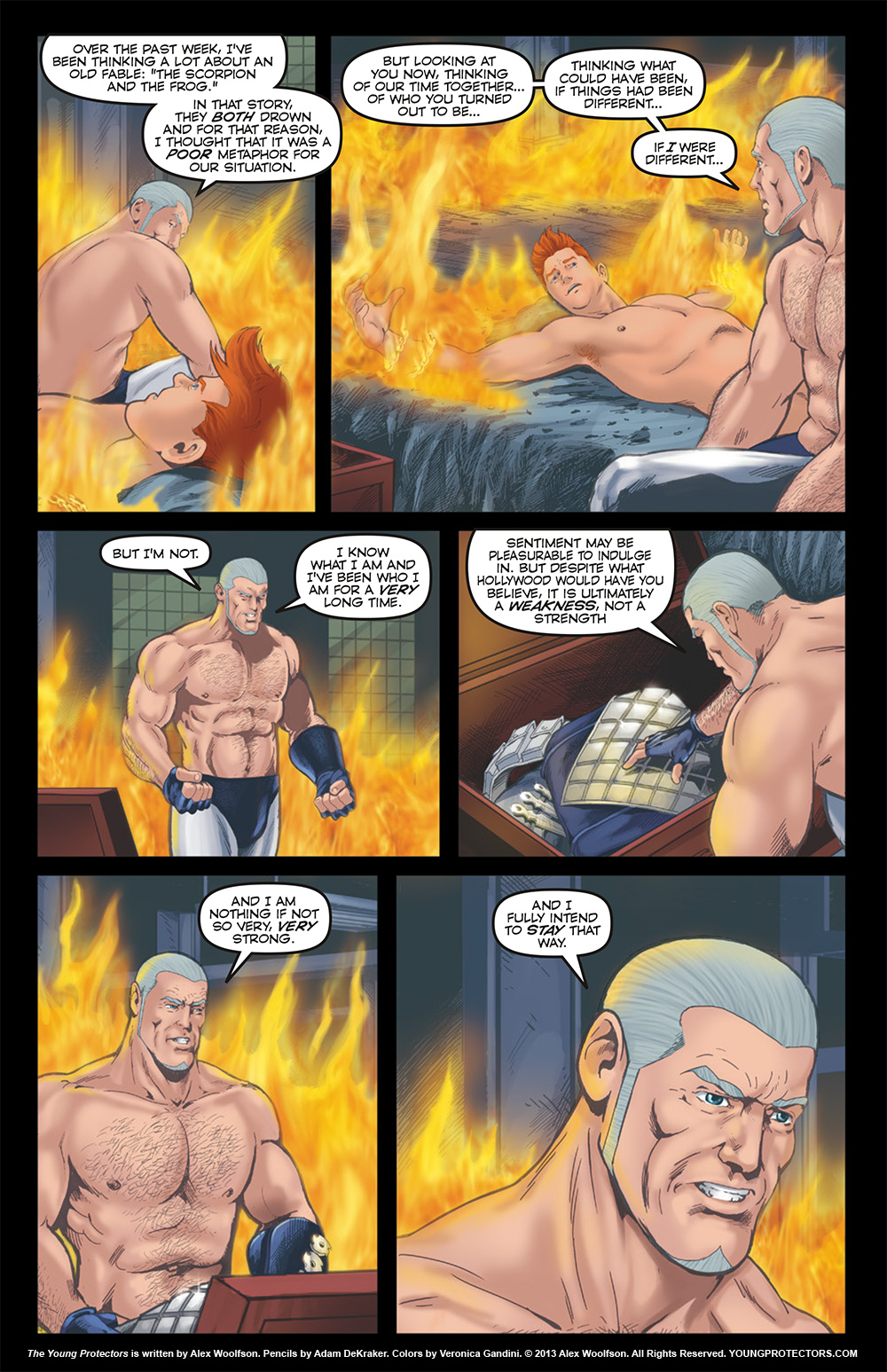 OVER THE PAST WEEK, I’VE BEEN THINKING A LOT ABOUT AN OLD FABLE, “THE SCORPION AND THE FROG.”

IN THAT STORY, THEY BOTH DROWN AND FOR THAT REASON, I THOUGHT THAT IT WAS A POOR METAPHOR FOR OUR SITUATION.

BUT LOOKING AT YOU NOW, THINKING OF OUR TIME TOGETHER… OF WHO YOU TURNED OUT TO BE…

THINKING WHAT COULD HAVE BEEN IF THINGS HAD BEEN DIFFERENT…

IF I WERE DIFFERENT…

I KNOW WHAT I AM AND I’VE BEEN WHO I AM FOR A VERY LONG TIME.

SENTIMENT MAY BE PLEASURABLE TO INDULGE IN. BUT DESPITE WHAT HOLLYWOOD WOULD HAVE YOU BELIEVE, IT IS ULTIMATELY A WEAKNESS, NOT A STRENGTH.

AND I AM NOTHING IF NOT SO VERY, VERY STRONG.

AND I FULLY INTEND TO STAY THAT WAY.

So, last time we reached 920 comments in 4 days, this time there were only 3 days between updates and there were over 1800 comments on the last page! Holy cow. Y’all had a lot to say and it was again such smart stuff—more speculation about The Annihilator’s motivations, an analysis of The Young Protectors as an example of the Fool’s Journey (I knew all those years of reading Tarot Cards as a kid would pay off!), a veritable Alternate Universe fic where a whole bunch of you chimed in on what an encounter between mirror universe Young Protectors characters might involve… And many, many very kind words about the comic, the art and my writing which I very much appreciate. 🙂

There were also a few concerns that were expressed that I want to respond to here because, as a gay guy who’s seen a lot of media where gay men are somehow “punished” for being gay, I think I would have similar concerns if I were a reader. Again, I’ll try not to reveal too much, but if you want no spoilers at all, please skip this next section.

I am writing a story with super-heroes (and at least one super-villain) who just happen to be gay. Our beloved young hero Kyle is in the middle of experiencing some serious adversity and, because this is a super-hero story, it’s rather super-sized adversity. This was actually a difficult section for me to write, even with me knowing how it all turns out. If I were a reader, I would have some serious concerns about what’s going to happen to this gay hero I identified with. Is he going to be killed to further the plot? (As happens far too often.) End up miserable and alone? (Which also happens far too often.) You all know how I am about spoilers but know this: there is no way that this story ends with Kyle miserable and broken. As I stated in the Kickstarter, this is about Kyle learning to become one of the most powerful champions the world has ever known. As all true heroes must be, he will be challenged and tested greatly, but in the end, he will be stronger for it.

For some of you, the last few pages have been a purely engaging turn-of-events. For others, they’ve been difficult. The truth is, I take no pleasure in my characters’ suffering (or, all joking aside, no pleasure in my readers‘ suffering through a plot twist either). I especially do not take any pleasure in having one of my gay characters suffer. But there are deeper truths I’m wanting to share here. For example, when we are taken advantage of, it is common to feel very alone. To feel that it was somehow our fault, that no one else would be so naïve, that it’s the end of the world, etc. These feelings get addressed explicitly in future pages of The Young Protectors but as you can see from many comments on the previous page, it is actually not an uncommon experience and those who experience it are, in truth, far from alone. Many of you have shared similar stories and many more have offered empathy and support.

There are a lot of ways that art can be a positive force in people’s lives. Certainly, escapism is one of those ways and The Young Protectors has offered and, not to worry, will continue to offer plenty of fun escapism. But art can also provoke thoughtful discussion and even help us process some challenging things in our lives by seeing them played out with purely fictional characters. And with a webcomic with such a thoughtful, warm-hearted community, you can even find others who have gone through the same thing to talk to about that and who can help you to the other side.

Yes, Kyle is going through a very difficult time right now but this is a five chapter story and we’re not even close to finishing Chapter Two. This story-arc is not a tragedy—far from it. Kyle will be fiercely tested but ultimately he will emerge as the true hero he is, stronger than ever before. If I were a reader, I’d want to be told that. So, that’s why I’m telling it to you now.

We had our tenth bonus page in a row on Wednesday and shortly before I posted, y’all yet again tipped the donation bar over so there will be a bonus page (page 33!) this Wednesday!

Big hugs go out to new friend of The Young Protectors Krista C. and also to long-time friends joshua G., Pam W., Robert B., Cassandra S. and Stephanie C. for their super-generous $25 donations! And this makes Pam’s third and both Cassandra’s & Stephanie’s ninth and both joshua’s & Robert’s thirty-third (!!) super-generous donations to this comic! You all ROCK!

And finally, superhero-strength hugs go out to new super-friend Alexandra A. for their amazingly generous $50 donation! Thank you so much, Alexandra! You are AWESOME! 🙂

So! After pontificating a bit about animals and Hollywood, it looks like The Annihilator has finally made some kind of decision here. I wonder what it could mean?